Time for the shop

After a sustained effort that nearly did us in we are really getting the shop and studios set up for serious work. My wife got her studio going first. She already had a pretty good setup in the large family room of the house we left. It was mainly a transfer and organize for her to get to some meaningful work. I have a longer and road since I needed to find and install some major machine tools.

This is my wife's paint studio. In an adjoining room we will set up for printmaking and work on paper. You can see the little etching press I build for her a few years ago. Right now I'm in the rough phase of the design of a much larger press. Originally I built the little one as a delay tactic to get her a press but delay the inevitable need for a much larger machine. It turns out she is one of my best customers for custom equipment and tools.

Buying machinery used is a waiting game. You have to be patient but at the same time ready to move very quickly to catch a good buy. In the meantime I work on shop infrastructure stuff. All the stuff you take for granted in an established shop. Bolt bins, work benches, shelves, stands. It all takes time or if you have buckets of spare cash you can just buy it. As you will see moving forward I'm what they call a cheapskate.

For years I have not been able to get at all of my hammer collection. They have been literally stuffed in drawers and cabinets. Building a hammer rack was high on the to do list. 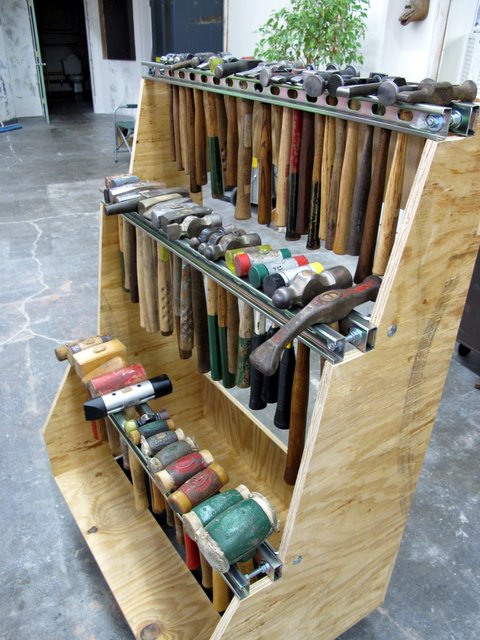 I thought I built it big enough but I missed a full drawer of weird hammers. No sooner than I built the rack then I had to expand it. You can see the hammer supports are made from Unistrut channel. After doing some of the renovations I've become s fan of Unistrut products. It takes a little while to get a little inventory of fittings but now that Lowes and Home Depot sell some of the stuff its a lot easier. The stuff is pretty cheap and strong. Before I got the welder hooked up it allowed me to build some needed stuff without welding.