I ran across some pictures of a small job I did a while back to resurrect an old oak library table we found. We found the table at a local consignment shop near our place for a reasonable price at a time when we needed a new kitchen table. On closer inspection the top surface was pretty beat up and would take a major effort to re-veneer or restore. The veneer was peeling off and the corners had seen better days. The legs and drawers were still in solid shape making it a good buy to spite the top surface. The legs are quarter sawn oak or at least have good oak veneer. The table itself is fairly heavy for its size so I pretty sure it didn't come from Ikea. It looks like a government issue library table. The only thing missing is one of those old solid oak office chairs.

A few years ago I read an article on the antimicrobial qualities of copper. Copper is also one of my favorite materials to work with. It warm rich color and smell remind me of the sheetmetal shop. We bought the table with the plan of skinning it with copper sheet. This would cover the beat up top surface and look architecturally cool. We hauled the table home and started making some calls to buy a sheet of thin copper for the top. I ran into a problem right out of the gate. Most copper sheet comes three feet wide and we needed thirty seven inches plus the return for the edges. Opps. I figured out an alternate way to do it with the narrower sheet but it was not what we wanted. Having an additional seam right where your arms sit was not what we had in mind. After calling all my copper contacts I still came up empty handed.

On a whim I checked Craigslist. To my surprise there were several listings for copper sheet. This was around the time that copper scrap prices were going up rapidly so people that had been sitting on some material were cashing in on the high scrap prices. A week later I checked again and somebody had a listing for a full ten foot that was sheet four feet wide. Suspicious after talking to my normal metal suppliers I questioned whether the person listing the copper had mis-measured it or maybe it wasn't even copper. After a couple of email exchanges I decided to go and at least have a look. Too late he told me somebody else was on their way to get the sheet. Dang! One thing about Craigslist is you have to move fast.

A few hours later I get a call that the buyer still hadn't shown up and If I wanted it still to get down there quick. I jumped in the truck and got going. I think you know how this ends. Yes, I got the sheet. It really was four feet wide and honest to god copper also. I asked him where he got it and he told me he worked at a metal supply place and he bought it for a project that never got going. It turns out the supplier he worked for is one of the places I called????? Still have not figured that one out yet. 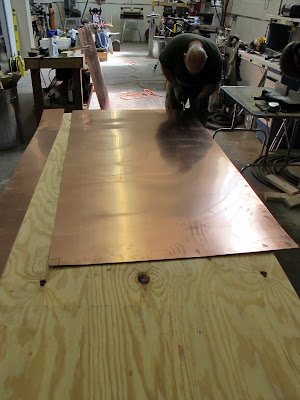 My Kett electric snips made short work of the long cuts. In this shot the corner notches are ready to be snipped out with hand snips. 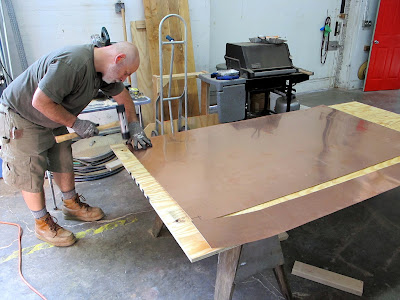 Flattening the corners after cutting the corner notches. The hammer face is UHMW plastic. This copper sheet is .027 thick. Since I don't have a sheetmetal brake yet I had to form the bends by hand with a slapper. 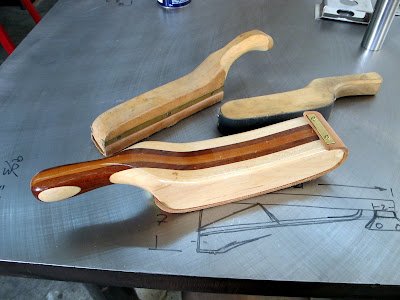 A slapper is just a broad faced hammer. Typically there are two types, soft faced and hard metal. For this application we don't want to stretch the material so soft face is the right choice. 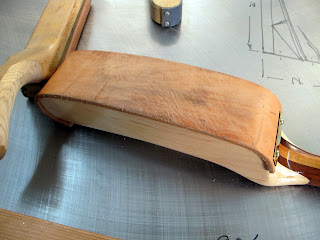 A shot of the leather cover on the widest soft slapper I have. I couldn't find any pictures of the forming operation for the actual table cover so I set up a short demonstration piece. 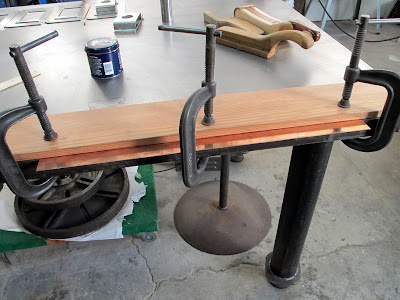 The forming operation uses the table itself as the die to form the inside of the bend. The board is just a broad clamping surface to keep the unregistered blank from shifting during the slap bending. On the table I formed two bends adjacent to one another to anchor the sheet and accurately locate the opposite side bends.

The trick with slap bending is not to get greedy. What I mean by that is just form a few degrees the full length of the bend at a time. Go back to the start and form a few more degrees each pass until you reach ninety degrees. 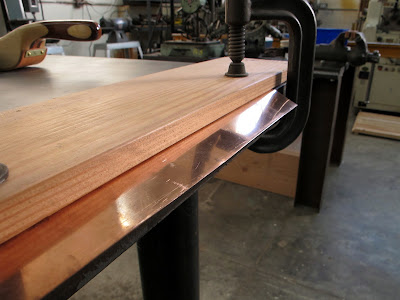 Use the slapper as a broad faced hammer. Aiming to contact the length and width of the slapper to the material at the same time. Sometimes a glancing blow is an easier way to make that kind of contact hit. Rotate your clamps to access the material close to the clamp. Don't remove any clamps if possible. The bend can migrate back under the clamp board if you remove a clamp or don't have enough clamps. 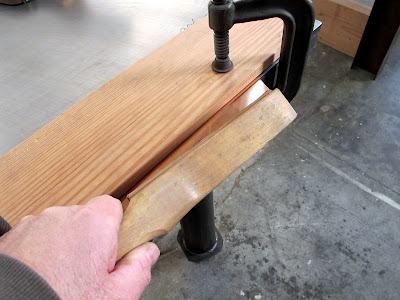 Keep working the bend over until you reach ninety degrees. There will some spring back will all materials. The softer the material the less spring back. 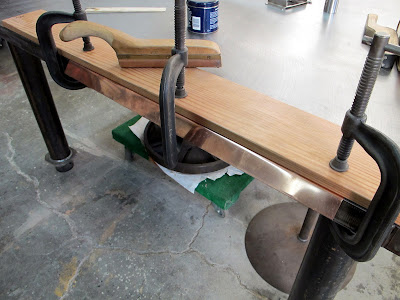 Almost there. I did this demo bend in three passes to get to ninety degrees. 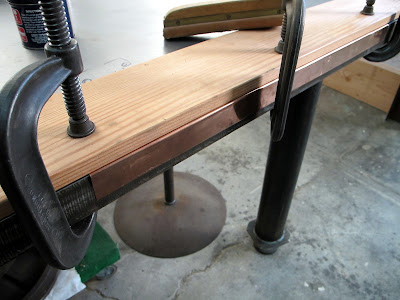 Ninety degrees. The technique I just described is what I used to make the bends on the skin for the table. 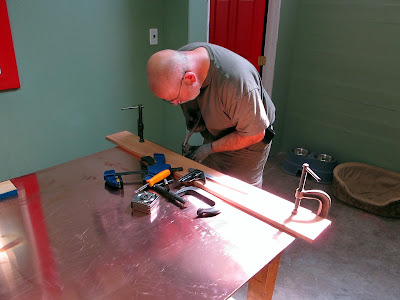 Before I made the edge return bends I punched holes along the edges so we could use tacks to secure the top to the table. It was a visual detail to make it have more texture and look like an old time steamer chest.  It took a while to layout and punch holes on one inch centers all the way around the table. My first Idea was to just drive the tacks through the material without making a starting hole. A quick test showed this was a really bad idea. As it was there were some pinched fingers driving all those tacks into an oak table. 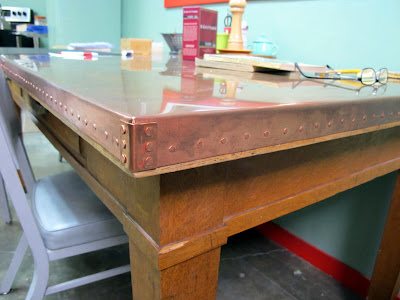 We added some corner covers to hide the un-welded seam. You can see the copper tacks we used to secure the top to the table. These had to be smoothed because your arms and hands bump into the heads of the tacks. A scouring with Scotchbrite deburred them enough so you don't notice them with your arms and legs. 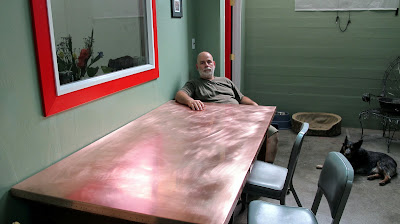 We like the cover. Certain foods stain it some but its easy to clean. You quickly give up on keeping it polished all the time. In the winter is cool on the arms if your like me and didn't listen to your mom about no arms on the table while your eating. We ended up getting some place mats to keep the elbows warm.

Thanks for looking.
Posted by Tom Lipton at 6:13 PM