Well folks I'm going for full web immersion. I have been shooting video of some of the small projects that normally I would be writing about. I'll tell you that a video certainly has more traction on the web than the measly written word. Don't worry, I'm not giving up on the writing, but If the response to a few amateur video's on broken metal parts is any indicator then it will definitely become part of my bag of tricks.

So the project now is the last broken major part on the Kearney and Trecker Autometric jig bore. The bracket that the worm shaft rotates in was broken during the tip over festival by the previous renter. I shot a video series of the repair so the written description will be shorter. The written blog article is a good format to show some of the more subtle closeups and higher resolution images. 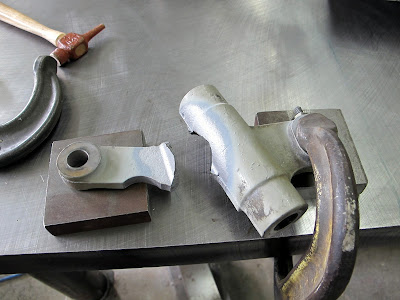 The first step was to remove the WWII vintage machinery green paint from the weld area. I was impressed to see that the Autometric company took the time to prime as well as paint a mundane worm gear bracket buried inside a machine. The paint is more than sixty years old but it was as good as the day it went on. Probably loaded with a bunch of good stuff like lead and toluene. 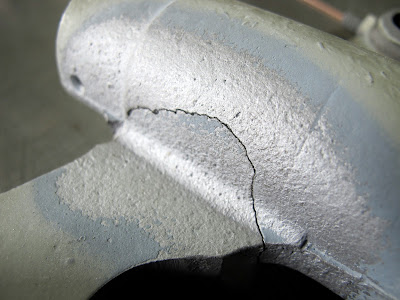 The crack fit back together really well. Its almost like a puzzle piece how nice it snaps back where it belongs. I tapped it into tight alignment and clamped it for welding. 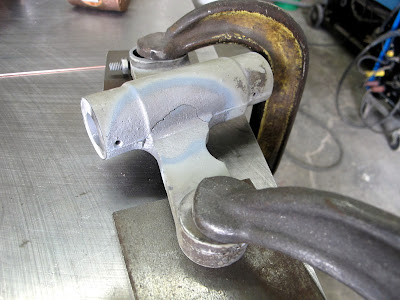 Here its ready to be gouged for the weld prep. I used a die grinder with a carbide ball burr to root out the crack for welding. Unfortunately I didn't get any pictures of the gouging but I did shoot some video. 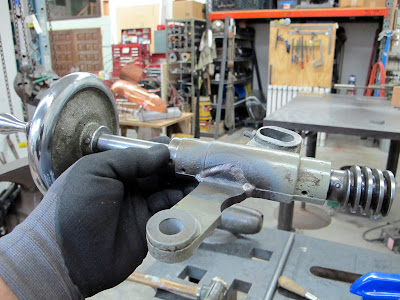 Fast forward a bit. There was a slight misalignment of the two journals that was discovered during assembly that needed to be corrected. I blued and scraped the high spots with a triangular scraper until I had the journal fit the way it should be. For reference I'm using Ni-99 TIG welding rod for cast iron for this repair. 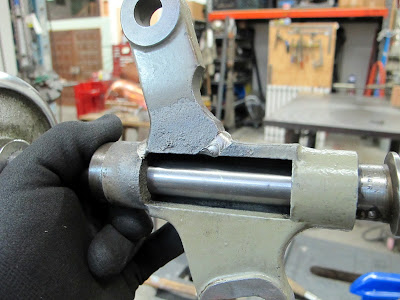 The backside of the bracket. You cant see it but I did weld all the way around the crack. The worm and thrust collar are held to the shaft with small tapered pins. 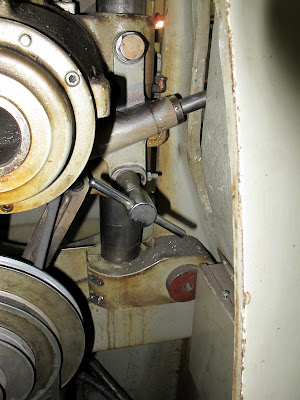 This is where the bracket lives. It has two positions, engaged so the worm is in mesh with the gear allowing angular indexing of the rotary table, and disengaged so that the main motor is free to rotate the rotary table/faceplate for lathe type operations. I thought it was interesting that when the worm is engaged it rotates the entire drive system. So when the handle is cranked you are actually turning the motor and all the belts you see in the picture. 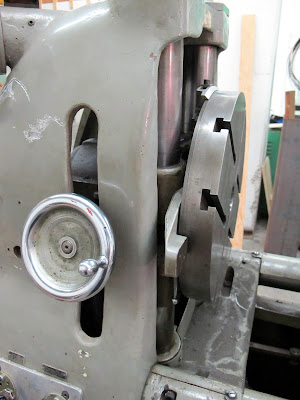 As you can see in the pictures above this is not a real fine pitch worm and gear. Its something like 40:1 ratio I would guess. Not quite what you would expect for a precision rotary table. 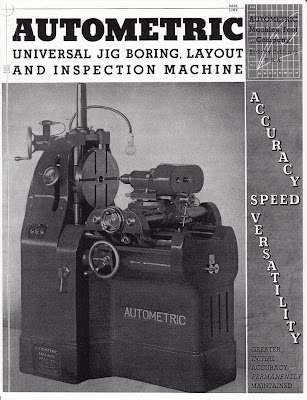 The fellow I got the machine from dropped off the second spindle a few days after I got the machine. I'll be taking a look at that pretty soon. For now the focus is the electrical system. I want to get it running so I can test it out on something.

Check out the video series on the repair part 1.