One of my neighbors dropped off a small part with my wife to see if it could be welded. Scott is a metalworker artist that lives down the street. He really doesn't have much of a shop and ends up building most of his sculptures out in the alley with his MIG welding machine. He builds metal animals and furniture with found objects, typically metal and aged wood. For this reason he is always on the lookout for metal objects for his work. I think the word is out to all his friends too because his pile seems to grow when any of them stops by or has some metal bit they don't want any more.

One of his recent acquisitions was a wood cutting vertical band saw. I didn't hear the story about where it came from but somehow it was damaged. If you have been following the blog then you know I have a soft spot for machinery repair. Add this onto the fact that Scott is a cool cat and fellow metalworker and you have the makings of a good project.

Looking at the part it appears the saw was tipped over and fell on the band wheel side of the machine. The part that he brought over is the bracket that does the upper wheel tensioning and blade tracking. Obviously this is a pretty important part. Scott was thinking it would be an easy welding job for TIG so he gave it to my wife to see if it could be welded. My wife is an extremely talented welder and immediately noticed it wasn't aluminum but non other than the dreaded pot metal.

Most welders have a couple of stories in their inventory about trying to weld pot metal. Nobody can really tell you what it is other than pot metal 101. The alloy contains all the most difficult to join materials all rolled into one alloy. Zincalumagleadalloy would be as accurate a description as pot metal as any. It is the scourge of the welding community. To a person it is hated everywhere. 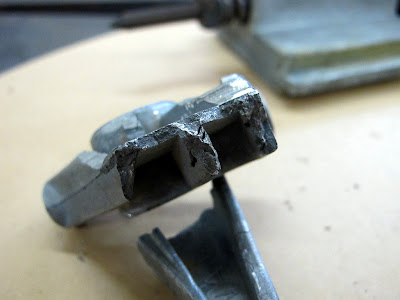 The density is always the give away for me. Many of these materials that are collectively called pot metal contain high levels of zinc in them which is fairly dense. This is a common permanent mold casting material and was never intended to be repaired by any welding process or mere mortal. You can see in the picture the large chewy coarse texture of the break.  My wife smartly tossed the job over the fence to me to see if I had any special tricks up my sleeve. 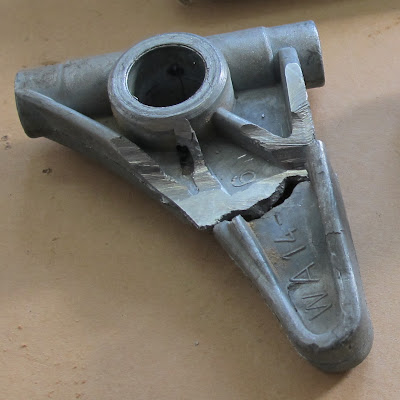 I took a look at the part and came to the same conclusion as my wife. Welding was not the way to repair this part. My second instinct was to see if you could easily buy one. Zinc is used for a reason, its very inexpensive to produce. If spare parts are available for this saw then I would guess this is a sub $10 piece. But where's the fun in that? I do this stuff because I like to. Its pretty cool when you hand back a job and the customer is totally blown away by something you had fun doing. For this reason I decided to make a completely new part from scratch. I shot a bunch of video so check out the oxtoolco YouTube channel in a couple of days to see live action.

The first step was to take some measurements of the original part and make a shop sketch. I find this light marinating helps me form the plan of attack for the work sequence as I measure and examine a piece like this. 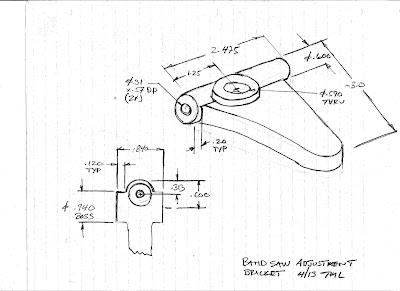 The first step was to rough out a rectangle the same size as the exterior of the sample part. I started with 1-1/4 thick 6061 plate. Band sawed then milled on all six sides. In general with a part like this with some curves and steps you try to keep it square and blocky as long as you can so its easy to pick features up and hold on to the part. I poked all the holes in it when I had it in the mill. The original part had a shaft pinned in place in the .590 hole. I bored this hole so the pin is a press fit. The reason for this is the roll pin was put in willy nilly and would be a pain to locate and re-use. With a press fit and maybe a setscrew as a chicken bolt the shaft is not going anywhere.

I decided to do the .940 bosses first. I made a quick holding spud to fit the large hole in the part accurately. This spud will be used to turn the bosses on either side of the part. 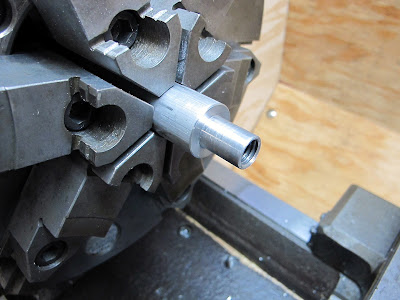 The spud is tapped to take a 1/2-13 bolt. The length is a whisker shorter than the length through the part so when the bolt and washer come up against the part it is clamped securely. The boss will be an interrupted cut so I used a large fastener to hold it to the fixture. 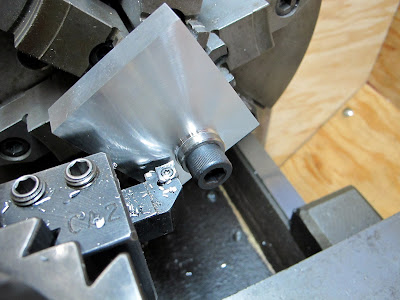 In this picture you can see the washer and bolt holding the part to the spud. I just tapped the washer into alignment so it didn't run out so much and get cut by the tool as I turned the boss to the correct diameter.

The next operation was to cut the small round bosses on the end of the part. I decided to do this in the four jaw chuck. I suppose I could have done it in the mill but I was in the mood for lathe work. 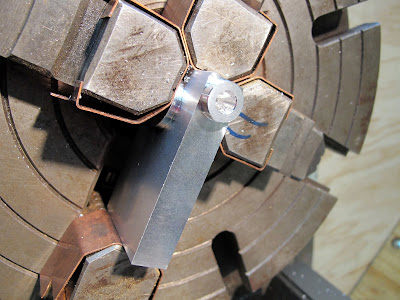 I had already put the small holes in so I had something to indicate on. With two chuck keys and a good indicator its easy to align something in the four jaw. I used to hesitate to use the four jaw chuck, but since getting my chuck changing setup down pat and having a second jaw key its really not a serious roadblock anymore. 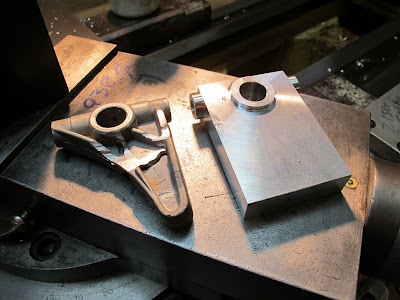 This is after the four jaw work. The part is starting to look like something. Next step is cutting the radius on the outside of the part. For this I'm going to use an old time toolmaker technique to step the radius with a ball nose end mill. I have heard several names for this technique but the one I like the best is "Kellering".Keller machines generally followed templates or models but they made their cuts as a series of stepovers that look very much like this method. 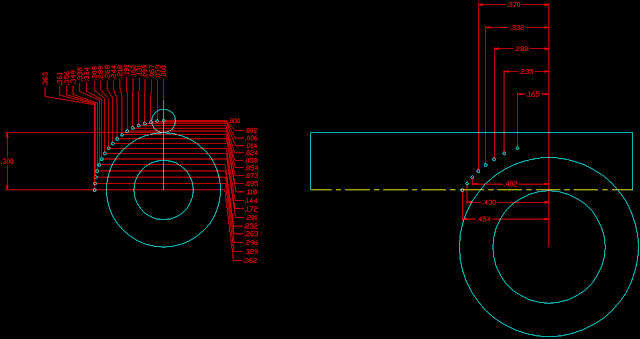 Here is a screen shot of the layout for 5 degree steps with a 1/8 ball end mill. I plotted the coordinates in AutoCAD for the Y and Z positions on the left and the X positions on the right. Because of the boss I need to stop the tool short as I come into contact with the curve of the boss. All the coordinates are off the centerline so I can use the same numbers for the opposite mirrored half. Its a lot a numbers to keep track of but you can do some cool stuff with manual machines using this technique. 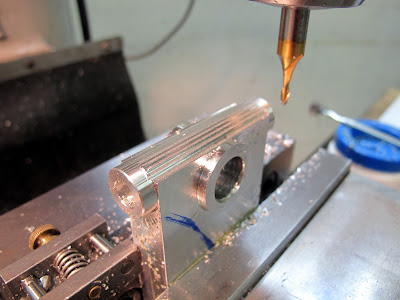 Here we are partway through the process. Its the same technique that modern day CAM software calculates the toolpaths for three dimensional milling. 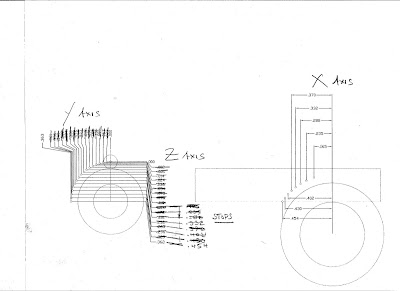 Here is my cheat sheet. You see I marked off each set of coordinates as I used them. If I didn't do that then I would be lost after a few passes. 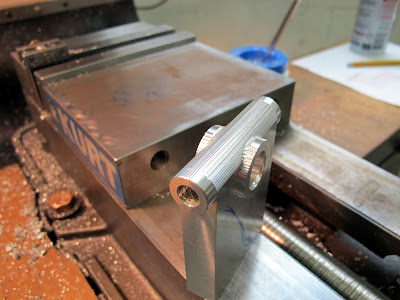 Here is the part right off the machine. 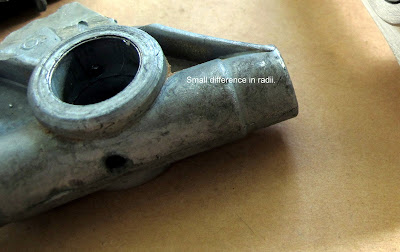 The X positions bumped into the boss by a small amount. At first I was puzzled why that happened. It turns out it was the small difference in the radius in the sample part. My Z touch off was on the smaller diameter when it should have been on the slightly larger size. For this part its not a big deal but it easily could have mattered. I like to go back and understand what went wrong so hopefully I don't do it next time. 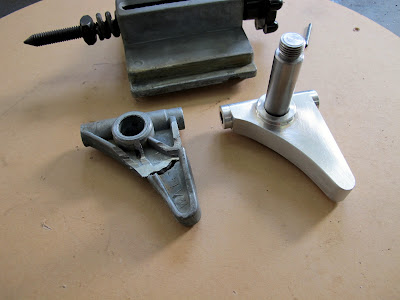 Here is the completed part. I re-used the shaft out of the original part and pressed it into the new bracket with a couple of grand of interference. I heated the part with a propane torch to expand the diameter and make the assembly easier. 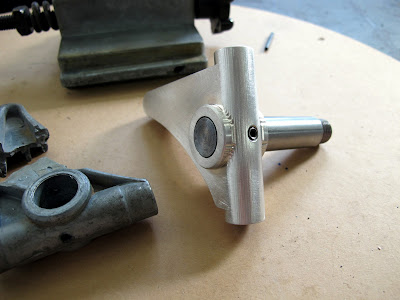 The curve was cut on the band saw and hand draw filed until it matched the original. I added the chicken set screw just in case.  Here is one of the video's I shot that shows the fitting of the shaft into the new part.
Be sure to check out all the video's in this series. I had a some fun making the part and Scott is jazzed to get his saw going again. Its a win win dealeo.