Recently I started a large (secret) project for my wife that will take the better part of a year to complete. Right away I realized there were some missing infrastructure items that would be required that would be hard to built right in the middle of the larger project. The first tooling deficiency I ran into was my lathe steady rest.

The large Yam lathe I bought last year came with a significant amount of tooling. A three point steady rest was one of the tooling pieces. Initially everything looked pretty sweet. My large secret project has need of several long large diameter shafts which is one reason I chose this particular lathe. I figured get the big Conan lathe first and hold out for the sweetheart deal on a really nice smaller lathe when it appears in my machinery shopping sights.

During the secret project design phase I made a decision that was connected to the lathe acquisition. Since it is so long I decided to increase the basic size of the project considerably. Hey, if you're going to go to the trouble and expense to build your own secret project then go for the gold medal. Who the heck wants a bronze anyway?

So it turns out the steady rest that came with my lathe is way too small. It can pass 7.85 through the frame and I need to pass at least eight inches through. So this is how a tooling project is born. A steady rest is a pretty straightforward project in a machine shop. There is nothing too fancy or critical to the proper functioning of a steady rest so if your lathe is missing one I encourage you to go ahead and make one. 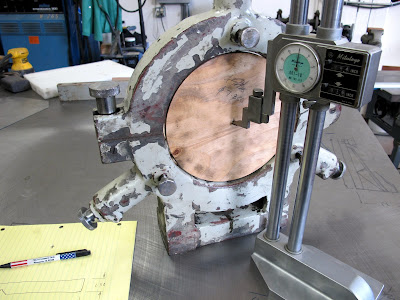 First order of business was to take some measurements of the stock Yam steady rest. The only semi important number is the center height off the ways. From these measurements its easy to develop the larger size I need. 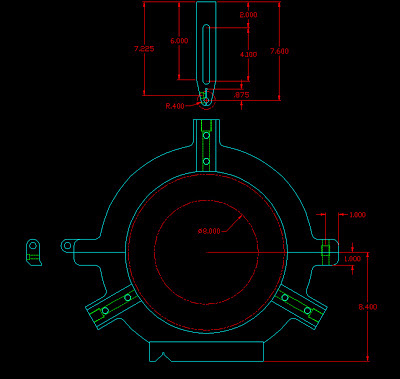 For the new steady rest I wanted anti friction roller tips instead of the bronze tips that the stock Yam unit has. I figured if I was going to build one I'd make it slightly different and better just for good measure. Roller tips mark the work less but have a nasty habit of sucking chips between the roller and the work. Non rotating tips generally don't allow chip between the work and the rip but at the the expense of marking the work more and with higher friction. Its a common and simple enough matter to make a thin plastic shield to keeps chips from finding the roller tips. 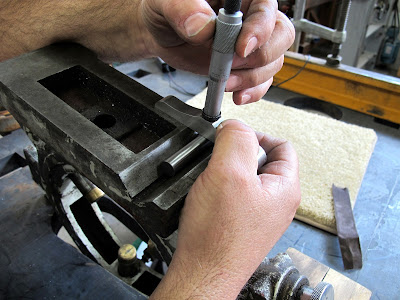 Measuring the vee way depth on the stock steady rest. I got lucky that it was a ninety degree angle instead of some oddball thing. 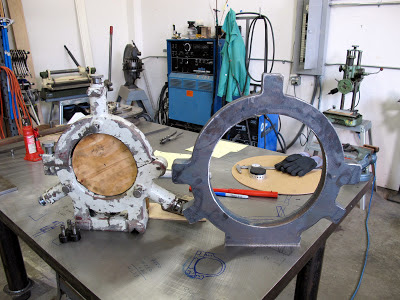 The large steady profile was cut from the electronic layout you see above. Material used is one and a half inch thick steel plate. I added some extra material in the center and at the bottom so I could cut the profile in half and still clean up the machined surfaces and end up with a proper circular opening. 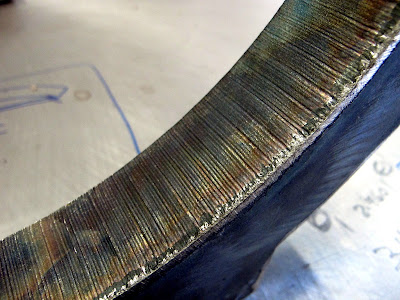 Check out the awesome oxy fuel cutting provided by Nowell Steel in Antioch. These guys do all my heavy steel cutting. Talk to Ted or Chris if you need some steel cut. 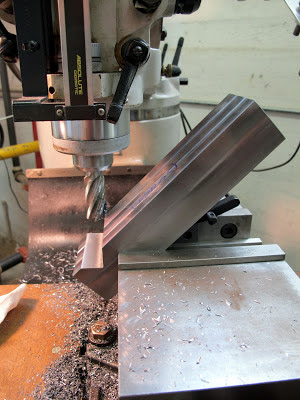 I scribed the base block directly off the stock steady rest. This was just for the roughing of the vee groove. Once I was close I started taking measurements for precision depth. 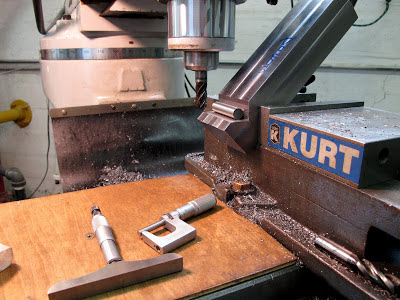 When the groove was shallow I had to use my multi-anvil micrometer because the pin was above the surface. These handy versatile micrometers have the ability to measure from a flat surface up as well as a multitude of other measurements. Once the gage pin was below the surface of the block the normal depth micrometer could be used with more stability. 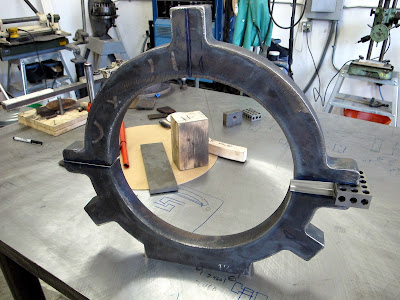 I used the trusty Doall vertical band saw to split the profile. It took about ten minutes to make the split I left material between for machining the ears to thickness after the saw cut. I still have to make the latch and hinge for the two halves. All the time I was sawing the profile I was wondering which way it would spring. This is one good reason to cut a profile as a closed shape. In particular if you use a heat producing process. If I would have waterjet cut this I most likely would have cut them as halves with a small amount of material for machining. On this thickness of material the oxy fuel process is faster and cheaper. My time is free in my shop. 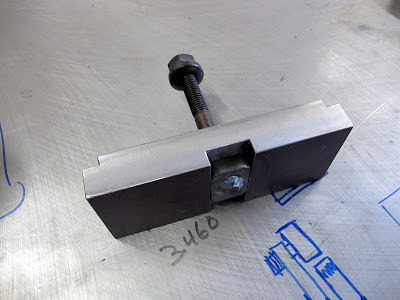 This is the clamp plate that secures the steady rest to the underside of the lathe. The bolt will pass through the bottom of the steady rest and be tightened from topside. 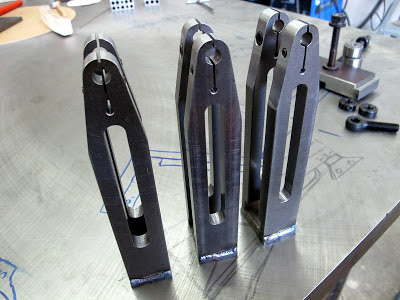 This last weekend I worked on the roller guides. There was quite a bit of work in these puppies. Early on I thought I wanted a single side support with a stud type cam follower. I was looking at one of the lathes in the main shop the other day and it had a very nice roller setup on its steady rest. The lathe was a Cazeneuve. Once I decided to make the support double sided it doubled the amount of work in these parts. My milling machine looks like a steel sliver bomb went off near it. 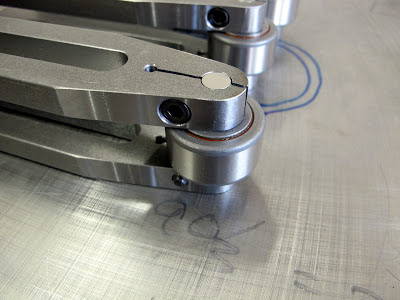 The axels for the cam followers are made from the hardened shanks of shoulder bolts. The shaft is clamped in the roller support tightly for minimum vibration.

I have been documenting the build with video. Check out the Oxtoolco YouTube channel if you want to see some live machine shop action on this project.