I had the opportunity to survey an interesting lathe recently. I appeared on our local Craigslist with a couple of sub-optimal camera phone pictures. Since it was local I sent the guy an email note inquiring about it to see if I could get a look at it. The machine is a 1964 Monarch Model 71 engine lathe. The lathe has a twenty inch swing (500mm) and  is seventy eight inches (2000mm) between centers.This particular machine has a hydraulic tracer attachment along the back side of the bed. 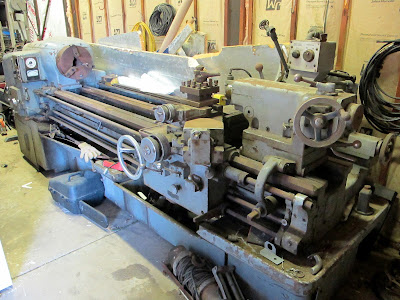 The first thing I noticed was the tailstock. What caught my attention was how massive it was. On closer inspection it has some very cool features. 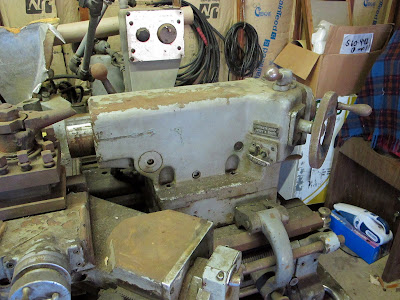 Starting on the left the quill has very nice graduations engraved into a groove milled into the surface. The diameter of the tailstock quill was like a huge slab of baloney and over four inches around. Surprisingly the internal taper was only a #3 Morse which looked oddly small for such a massively built tailstock. The second cool feature was its own independent oiling system. I even gave her a pump for old times sake. Looking lower below the oiler we see a really nice feature for large lathes. The curved arm headed downward is a hand crank pinion that engages the rack under the ways and allows you to crank the heavy tailstock into position. 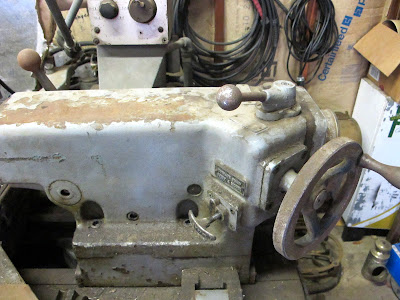 In this photo we see a couple of neat things. The lever on top is to change gear ratios for the tailstock. It has three positions, High, Low and Neutral. The lever shifts perfectly even though nobody has moved it in at least fifteen years according to the owner. I must have shifted it a dozen times playing with it. The angled handwheel is much more ergonomic than the standard type at the end of the tailstock. 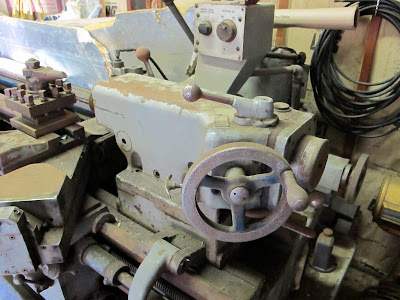 It doesn't show very well but the cap on the rear of the quill has a graduated dial that reads to .001 (25 Microns). It does not move in and out with the quill it only rotates with no through hole to the quill ID. The lock levers, yes two can just be seen below the handwheel. 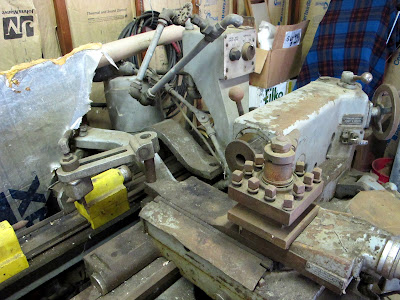 Moving along the machine we see some of the apron and cross slide. She shows some signs of rough handling on the carriage. In this shot you can see the pipsqueak Morse taper hole in the tailstock quill. 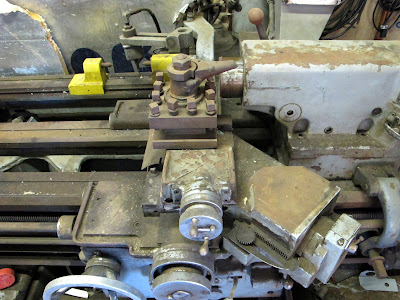 Looking down from the top we see part of the tracer attachment and control feedback. This side of the machine must have been bumped with a forklift as the spinning handles on all the handwheels were broken. Thankfully the shafts were not bent. I was able to turn everything even with fifteen years of dirt and dust on it. 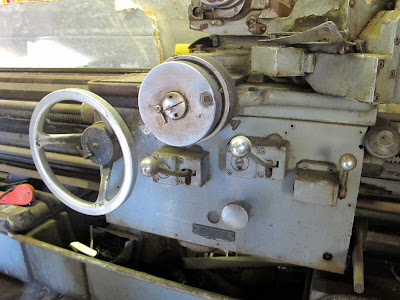 I always liked Monarchs dual feed lever setup. No funky shifting required and you can engage both at the same time if you dare. Nice large diameter wheel with fine straight serrations on the rims. In this shot you can also see the center bed support. It has dual chip pans and a center foot support that wraps around. The chip pans are heavy duty and looked to be massive cast bits. 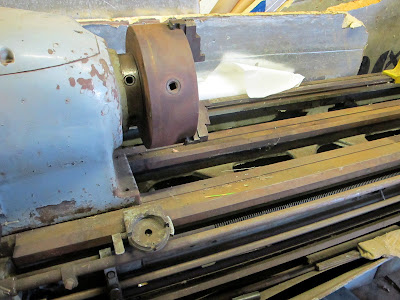 Up near the headstock now. The ways look rusty but in reasonable shape. Unfortunate on the rust but not the end of the world. At least there were no gouges near the typically heavily used chuck area. I believe Monarchs had hardened ways on many of their machines. Cam-lock spindle nose. The though hole was pretty small which is typical of many American lathes. 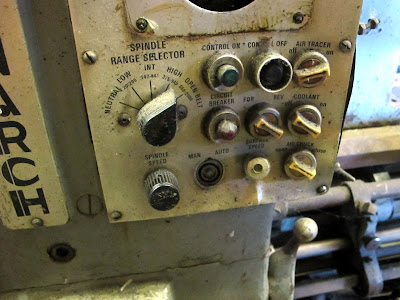 Here is some of the controls at the headstock. You can see it had electric range shifting and could go from 20 to 2000 rpm. Speed was controlled with the small black knob at the lower left. There was a hole above that housed some kind of electrical gauge not sure what it displayed as there were speed and motor load indicators to the right. 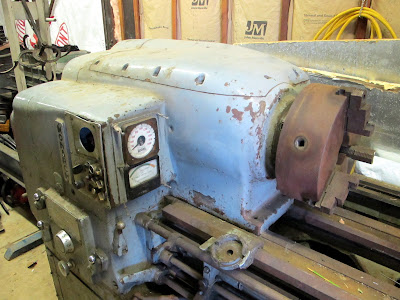 The ball end lever directly below the motor load meter releases the quick change gearbox and it operated probably as good as it did when this machine left the factory in 1964. In fact all the headstock levers moved and detented perfectly. For me this is a mark of quality, smooth operation of all controls with positive detents and engagement. I think the forklift did its damage up here also. The control panel was pushed in a bit. With the exception of the gauge it looked easily repairable. 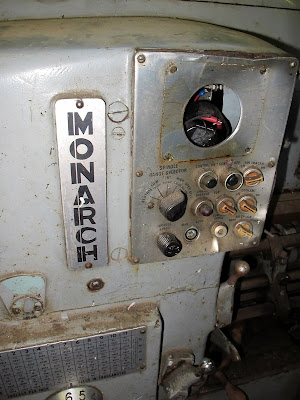 Another shot of the headstock control area. Here you can see the Monarch badge. Their fonts changed over the years. Looking at this font makes me think fifties or sixties.

Now for the scary part, the electrical enclosure. This machine had some advanced capabilities and features. The tracer is basically a servo system controlled by a template and follower. This requires some control logic in an age of relays and contactors. 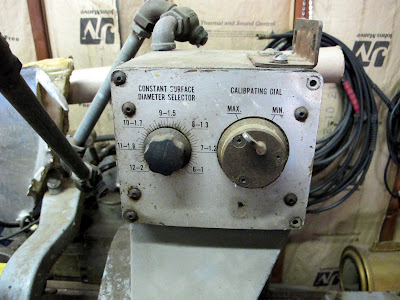 In addition to the tracer this machine could deal with changes in surface speed. I would guess it translated the template diameter and controlled the spindle speed to keep a relatively constant cutting speed on the work piece. It is also equipped with some hydraulic system that uses electrically controlled valves to change speed ranges. And it has infinite variable speed control within the major ranges. For all that you need a big box of electrical equipment. 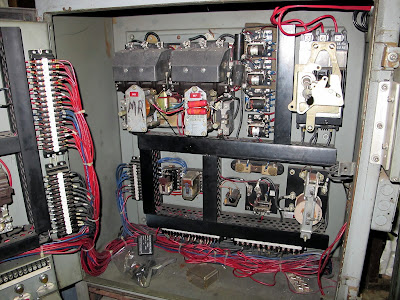 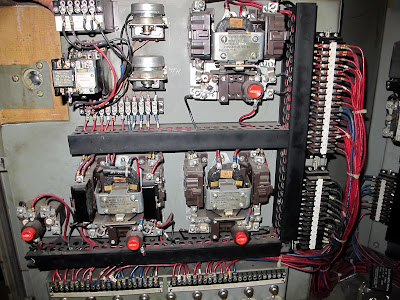 It was a pleasant surprise to see the electrical panel in great shape and pretty un-molested. Monarch in their infinite wisdom even put a copy of the electrical schematic on the inside of the cabinet door. Real class and professional engineering.

I sure had fun going over this machine. Its for sale in the San Francisco Bay area. The price is $.19/lb Yes that's right, nineteen cents a pound. This once proud example of American ingenuity can be had for basically scrap metal price.

The bones of the machine are there and look to be in good shape. It is most certainly not a project for the faint of heart. Just the machine retrieval will be a major expedition. But hey, without expeditions and people willing to go on them where would we be? Somebody with some guts and mechanical aptitude would find themselves with a lathe made by one of the finest American makers with several lifetimes more work in her. 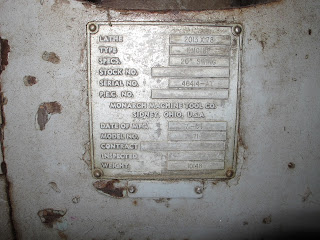