Have you ever tricked yourself into believing something or a particular line of thought? Well this shaft end condition fail is turning out that way. But like all good problems your best learning often comes from these excursions from less than critical thinking. At least one good reason to never make a life changing decision without sleeping on it.

So my shaft problem woke me up early this morning without realizing it. Immediately it was on my mind and I wanted to get to it. I thought the alarm had gone off but half way through the drive in I looked at the clock on the dash and I was a solid fifteen minutes ahead of schedule. Now I know why traffic was so light. After the first cup of coffee I was ready to do some forensic investigating with my test indicator. First place I went was the lathe which was still set up from the day before. 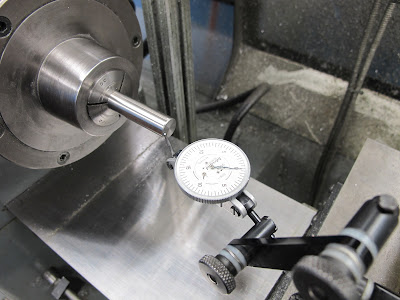 First I tested the end face with the rotation of the spindle. Part of me expected it to show something since the CMM had shown a problem with the end surfaces. I was surprised that the indicator showed that the end face as plopped into the machine were pretty good at just a few tenths. Hmmm, so I moved the test indicator to the OD of the part and tested it at the farthest point from the collet and right up next to the collet. 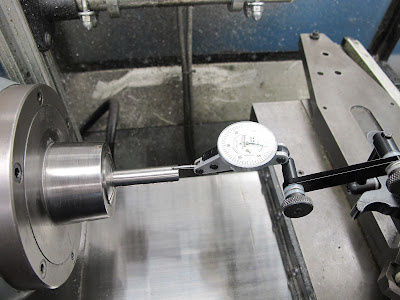 This is when I started to realize that I had probably out tricked myself about the cause of the bad end face parallelism. When It showed some runout (couple of grand) out at the end and near zero runout near the collet I started to come around to the idea that the shaft was just be bent. Duhh. This would pretty much explain everything I had seen and measured the day before. Nothing like a good nights sleep to clear out the cobwebs.
So a quick check on the surface plate with a test indicator and I pretty much solved my problem. I checked the shaft which showed the largest deviation from parallel on the ends. 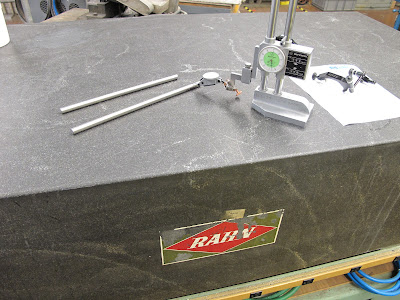 Holding the shaft from rotating I ran the indicator across the top of the shaft looking for the maximum number. I then repeated the check about every inch along the length. Guess what, the shaft was bent. I had convinced myself yesterday that this problem was caused by shaft whip in the headstock. It looks like that probably played no part in this mental exercise. So actually I'm pretty happy that I figured it out myself. But remember what I mentioned yesterday, Trust, but verify. Well now I'm off to precision inspection again to see if Bob's CMM agrees with my observation. How the heck do these scientists find something like a Higgs Boson? I cant imagine sifting through massive amounts of data and finding something that you cannot hold in your hand and interrogate. I guess that's why it takes them more than two days to sort it all out. The mechanical equivalent of finding the Higgs is like measuring the circumference of the earth with a six inch ruler and getting withing a handful of thousandths of an inch of the real number.
Bob ran the shaft for me again in the CMM. This time looking at straightness only. I learned something right away when I asked how he planned on supporting the shaft in the machine for a straightness measurement. Bob told me the shaft should be supported on its Airy Points  In short these are the support points on a horizontally oriented part that minimize droop or sag. I have heard of it before but never had the ability to detect errors this small or the need for this kind of support scheme for measuring.

What Bob measured was a series of slices of the round cross section of the shaft. From this he then created a three dimensional model of the shaft and found the best fit of all the axes of these cross sections. From this he can determine the smallest circular tolerance zone that these can fit on. In the case of the bad shaft it showed that the zone was .002 in diameter. Incidentally this is very close to the bends in the shaft I measured with the test indicator on the surface plate. 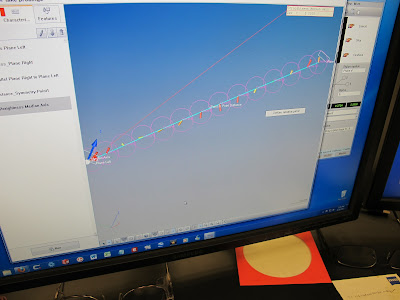 In this picture what we are looking at is the multiple cross sections taken off the shaft by the CMM. The line through all the circles is the best fit axis of all the cross sections, or the straightness. The cool part here is the little red bars that seem too corkscrew around the axis pointing away from it. What these tell us is the magnitude of the deviation from straight AND its orientation. That is very cool. So this shaft shows a general winding twist to the shaft as opposed to just a general bend in one plane like if you bent it over your knee.

This was a real fun mental exercise for me, and Bob actually had some fun also. I guess he never had to display the twist like that before so he got a little learning out of this seemingly simple little shaft. So in closing nothing is ever as simple as it seems and the devil is always in the details.

To err is human
To forgive is divine
To check is Engineering.