Today I had an interesting feedback experience. Most people that have spent some time around machine shops have had to deal with inspection and measurement. For a large majority of normal job shop work the machinist with properly calibrated measuring tools can self inspect most of their own work. Where it can get tricky for the guys on the floor are situations where there are many interrelated geometric surfaces and relationships. Depending on the company or shop policy everything may get just routed through a large inspection department as part of the quality control or assurance program. The situation I ran into today was that the part that needed to be measured was outside the envelope of the better measuring tools at hand and to add to that I really wanted a definite known number for the overall length of the part. 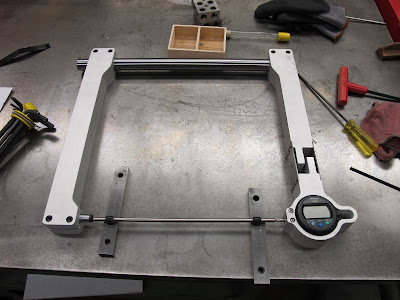 From a previous post I mentioned a measuring gage I have been working on in my spare time. In the picture above you can see a length standard between the anvils of the coil pack measuring gage. This particular standard is one from our large micrometer set that I was testing out the repeatability of the new gage. Our coil pack happens to be an odd size compared to common micrometer measuring standards. I can easily order almost anything I want in one inch increments. For this job I decided to just create a set of calibration standards that were the nominal target dimensions of the coil pack. This odd number gets plugged into the electronic indicator and presto the gage is calibrated. I figured that I could get pretty close and the actual dimension didn't really matter as long as I know what the number is. A perfect opportunity to test my puny measuring skills against a gazillion dollar CMM. 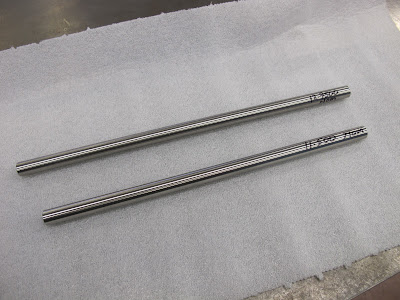 So I went ahead and made two gages that corresponded to the nominal and horizontal and vertical measurements of the coil pack. I used some half inch diameter case hardened Thompson shaft we had in the material room and parted them off in the lathe a little long so I could precision finish the ends. The first step was to semi finish both ends to get an amount to remove to precision size. I left about .005 on the overall length for the final finishing. This was all done in a Hardinge tool room lathe in nice condition held in a 5C collet.

After finishing to length and measuring with some large digital calipers I was satisfied that I was pretty close. My guess at that point was I was within a grand (.001) of the target dimension. Now just to give you all the information these calibration rods are around a foot long and a half inch in diameter. A 5C collet has maybe an inch of gripping length for that half inch diameter. I was not spinning the part particularly fast maybe 800-1000 rpm.  Something I have noticed in CNC lathes with longer parts stuffed into the headstock is part whip and how it effects the different lathe operations. Part whip can show up at unexpected times related to gripping pressure and the resonant frequency of the unsupported part in the headstock. Most times its not a real big problem but occasionally the planets align and you see some of the negative effects manifested in your parts.

So I  trotted off to the inspection department to see how well I did with my lowly calipers and a light touch. 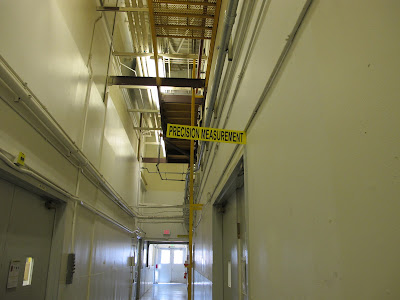 Bob runs the inspection department and was able to squeeze me in on the same day. I shot a little video of the measuring that is a little crappy, sorry. Note to self, don't use the zoom.
So according to Bob I did pretty well hitting the target dimension. Of the two gages I was within a tenth of the target on one and eight tenths on the other. The interesting part was the parallelism of the two faces. Since Bob's CMM is so cool and has all kinds of abilities he went ahead and checked the end faces for flatness and parallelism of the faces to each other. Flatness was fine on all faces and consistent around a ten thousandth of an inch across the half inch diameter. However the faces related to one another was off by .002 on one of the standards. WTF? That sure seems like a lot to me on such a small diameter. The length he measured was along the center line axis of the standard rod. So they are still usable if I relieve most of the larger diameter and leave the center alone where the length is good. This works out fine because what is normally called for on a rod like this is a slight curve on the end of the rod so that the calibrated length is the longest possible dimension that can be read. 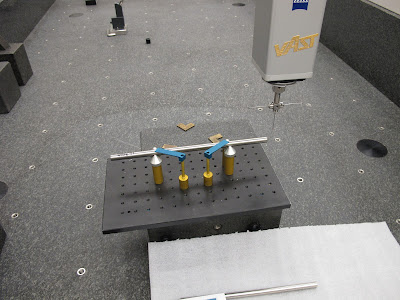 So my conclusion is that the rod was whipping slightly when I faced the ends. By blind luck I clocked the two faces on the one that was off .002 so that whatever error was in each end was doubled by how I oriented the second face when I finished it.

How could I have done better? Well in hindsight I might have made a little plastic bushing to fit the ID of the headstock that supported the rod concentrically. Collet clamping pressure may have played a part here. I reset the pressure part way through facing the rods. This was because I didn't lock the tightening mechanism (lazy) on the collet closer which I of course bumped causing me to need to reset the pressure. Spindle speed could have been much slower and still produced a good finish. I'm hardly likely to calculate the critical speed for every part that sticks into the headstock. So who is to say I wouldn't land on another resonant frequency. I might have used a chuck instead of the collet because of its much longer gripping surface. Any chuck runout is not a problem because I was trying to make a surface perpendicular to the rotational axis. If the chuck did not grip the part parallel with the spindle axis I might produce a surface like Bob measured. Hmmm, something else to check on the Hardinge. Collet might be junk also. Half inch collets get used quite a bit. Another thing to check.

Hindsight is obviously pretty good so what could I have done to check it in the shop with normal tools and gages a machinist might have readily at hand? I think I would start with measuring it in the machine with a test indicator. In fact I think I will do it just to see what is visible rotating it by hand with a sensitive indicator on it just for my own satisfaction. There should be no whip with hand rotation and I would be comparing the runout of the OD in a couple of places with the end face. This might expose what Bob found on the CMM inspection.

So at first glance what looks like a no brainer part has all kinds of problems. Its always the easy ones that come back to bite you. Not very much error in the grand scheme of things but what if it had to be dead nuts? So the moral of this story is, Trust but verify.

I will post an update on what I discover when I measure the parts on the machine.