As I work on the new forklift I keep finding new things that need attention. Looking at the front end near the forks I discovered I had a bit of a problem. I noticed that the two hydraulic rams that move the forks in and out were pretty badly bent. It looks like somebody bumped into a load that was sticking out a little and hit the rams when they were extended near their limit. Scale wise these are pretty small rams with .75 diameter rods for the cylinders so the fact they got bent is not really shocking. Think about a 12,000 lb forklift bumping into a small rod, I'm sure they didn't even feel it. 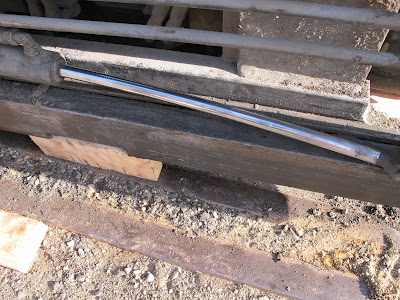 In this picture you can see how the rod is bent pretty badly. It was a minor hassle just to get at the rods so I could do something about it. My goal was to not remove the cylinders from the machine so I wouldn't have to deal with hydraulic oil and the more major disassembly needed to get them physically out of the front rack. Everything on this lift is really heavy. The forks by themselves probably weigh three or four hundred pounds each so you have to move slowly and use  mechanical aids like jacks and come-alongs to move things.

After looking the problem over I decided to make a tool to try to straighten the rods in place. I needed to generate a large amount of force in a small package to get it in around the rod at the bend. The rod was only .75 diameter but is probably made of 1045 or 1050 steel and induction hardened like most chrome plated hydraulic rods. Fortunately the rods had no scars or kinks in them that would make this an tough fix. I started thinking about how I could generate the necessary force to yield the rod in place. A quick calculation of the bending stress needed to bend .75 diameter 80Kpsi steel told me I needed to generate something on the order of 2 tons of force in the space I had to work with to get the rod to move. It would be simple to generate that kind of force if I had a small hydraulic ram and a pump, but I was out of luck. I ended up doing it mechanically. 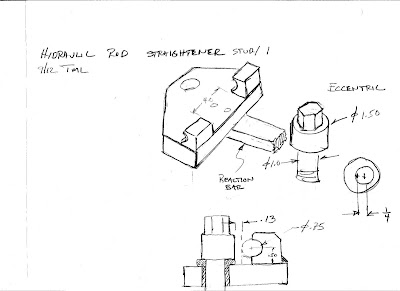 Here is my first concept sketch of the bender. It is an eccentric device similar in principle to this one. Eccentrics can generate some pretty high forces in small packages. The trick here was a little human was going to have to turn it and make it go. 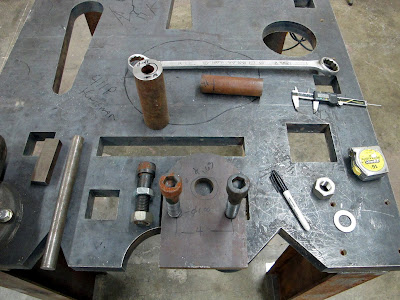 After a trip down to the shop to see what I had on hand to make this thing with I came up with some similar parts that had most of the ingredients. I went back and re-sketched the design based on what I had lying about. 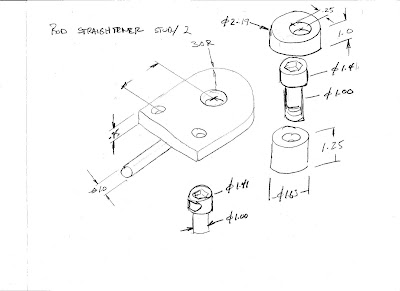 Second pass on the design study. I have added the sizes of all the parts so I could model it up in Solidworks. An eccentrics force is related to its position during rotation. In fact the forces go to infinity just at the point of going over center much like a toggle or knuckle press. My problem was I needed to deflect the rod enough to get it to yield. Another calculation told me I needed to move the rod only .015 inch to get the necessary force. That number assumes quite a few things and is related to simple beams and felt a bit small to me intuitively. This entire device would deflect under load and I really was really just guessing at the yield strength of the rod. In this case better to have a some extra travel than not enough. I decided to leave a space between the eccentric and the rod that I could make up with sacrificial shims. The shims serve two purposes. One, they allow me to make up the space between the rod and eccentric so I can get the eccentric aligned at the perfect spot in its travel to generate a large force. Second, the shims would be used to protect the hydraulic rod from damage from the eccentric rotation. 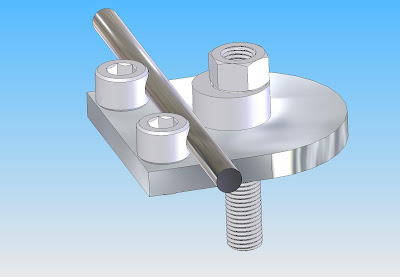 After modeling the straightener up in Solidworks. Note the space between the eccentric and the dummy rod. 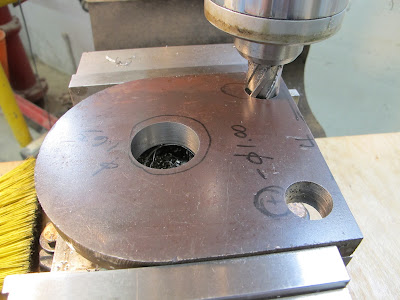 Time to get busy in the shop. This is the baseplate showing the eccentric pivot hole and the rod support holes. I'm using a Hougen Rotabroach to make the holes. These make fast work of holes in steel. Accuracy is really good and more than enough for this Sunday project. 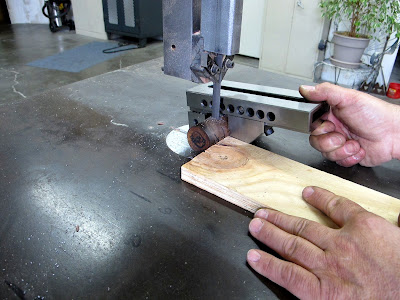 Cutting the eccentric pivot material on the vertical bandsaw. The upsidedown vise is a great handle and keeps the rod from spinning when you engage and exit the cut. The plywood is a belly board so I don't have to push so hard with my hands close to the blade. Safety first with fingers. 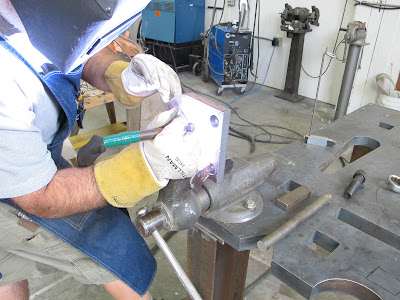 Welding the blank bushing into the base plate. The pivot boss is 8620 steel and the plate is just A36 hot rolled plate. Its all I had around on short notice. 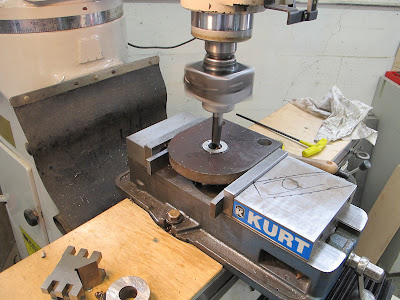 Boring the bushing to size after the welding. I left a little material sitting above the surface of the plate to make a nice surface for the eccentric to pivot on. 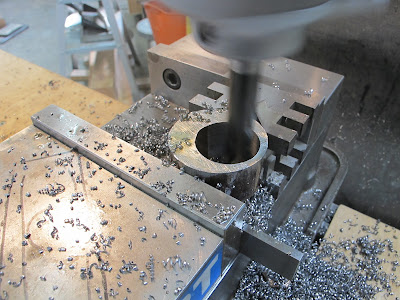 Boring the offset in the eccentric. You can see the .25 inch offset from center easily in this picture. I am boring it to fit the head of a large socket head cap screw that is my main pivot shaft. At this point I'm wondering if I have too much eccentric offset. 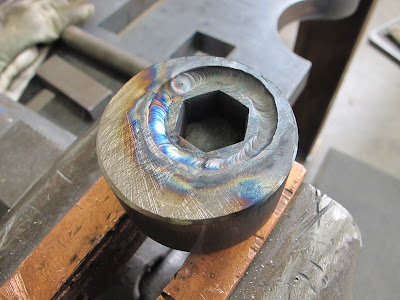 Almost finished eccentric. I needed to add a good way to drive the eccentric with a lot of torque. I ended up just welding a large nut to the top of the eccentric to drive it. 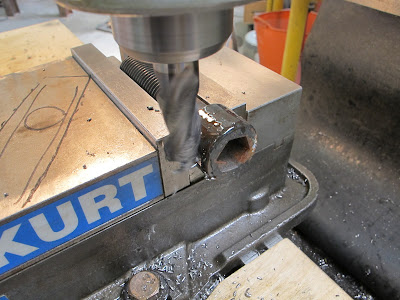 Here are the rod supports being machined. I cut a shallow saddle into the head of the screw to protect the hydraulic shaft from serious point loading. Originally I envisioned these pivoting to allow for the angle change during the bending but theory ran smack into reality and I had to just fix them in position. 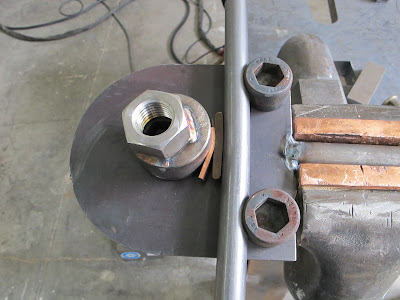 Here is a bench test of the bender. The rod in this case was just some cold rolled steel with a low yield point. You can see the copper shims have seen some serious force even for this fairly soft rod. Hey, at this point I'm pretty happy that it works. 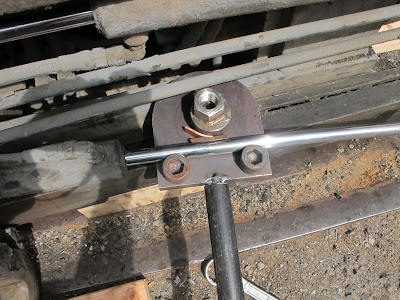 So far so good. The rods are some strong stuff. I had to add a length of pipe as a reaction bar to crank on the eccentric. The copper was totally squashed and extruded like silly putty. I think the yield strength is higher than I guessed at. 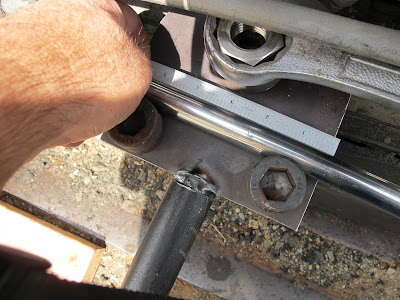 Starting to look pretty good now. It was hard to turn the eccentric in the hot sun and get good pictures. I chose to get the rod straightened and let my limited literary prowess describe the process in words instead. 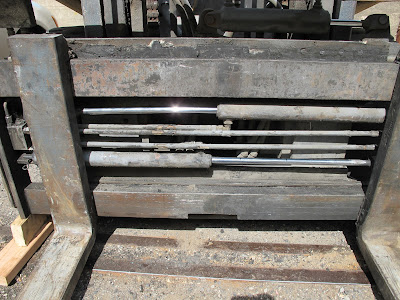 Not bad for a few hours of work. They are not perfect but the improvement is huge. The forks actually went in and out before the straightening even with the huge bows in the rods. The seal seem intact so I'm going to leave it for now and see what happens.
Posted by Tom Lipton at 6:03 PM