Last week we finished the preloading of our next test magnet HD3. HD3 is a dipole superconducting magnet with a 50mm through bore. It is part of our continuing base program development in increasing field strength and quality while evaluating new materials and construction processes. The preloading process is interesting because of the large size of the magnet and huge forces involved. This magnet is constructed of Niobium Titanium superconductor cable and is only superconducting when it is at very low temperature below the boiling point of liquid helium (9 Kelvin). At this low temperature the electrical current passes through the magnet without any resistance or losses.

HD3 is a dipole magnet which means it has two coils. These coils want to repel each other pretty vigorously when the current is flowing in the magnet. Field strength for HD3 is probably on the order of twelve tesla peak field. To help quantify what a Tesla sized field is one of the little high power neodymium magnets everybody has played with is about 1.25 Tesla right at the surface. If you have messed around with one of these magnets you know just how strong they are. HD3 our big superconducting magnet has a field strength an order of magnitude larger. What's the big deal right? Its only ten times stronger. Well here size and surface area do matter. HD3 weighs over two tons when it goes into the cryostat for testing. The forces inside the magnet are massive. Imagine a refrigerator magnet that weighs two tons and has a field ten times what one of the little finger pinching magnets you played with. In fact it would pull your refrigerator through the wall instead of sticking your shopping list to it.

One of the problems with superconductors is they really have to be coaxed into doing it. We have to treat them nicely and give them a perfect place to sit and a maintain the perfect temperature. The slightest amount of heat or movement and they quit superconducting. We call this a quench. This is when a superconductor quits carrying current without resistance. Its a problem when you have a dozen or so megajoules of energy running around inside the magnet when it quenches. Our test facility has an elaborate system to deal with the large amounts of liberated electricity when one of the test magnets quenches. One of the primary causes of quenches are tiny movements within the magnet itself. Something shifts or settles and these movements cause a tiny local heating which induces a quench. One of the ways we prevent mechanical movement and shifting is by careful preloading of the magnet at room temperature. 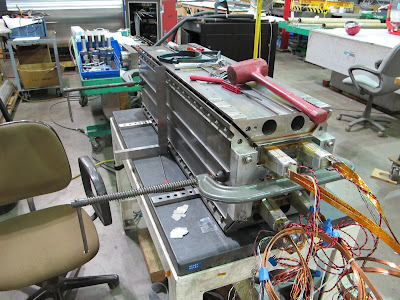 In this first picture the coil pack is out of the main magnet casing during the assembly process. You can see the gold colored leads coming off the two coils. These coils are wound similar to a racetrack but with the ends kicked up to improve the field at the ends of the coils. During this assemble step the coil pack is being squared up and measured. The trapezoidal plate on the top with the two holes is one of the load pads that transmit the preloading forces to the coils underneath. 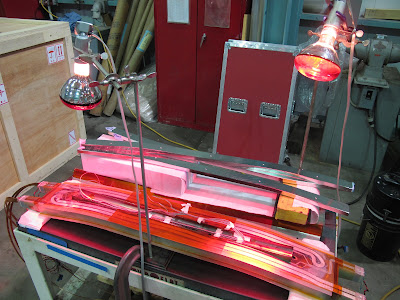 In this picture you see a single coil before it is put face to face in the coil pack. Note the down "kicked" ends where the coil winding is out of the normal racetrack winding plane. The wound coil is vacuum impregnated with special epoxy to keep it mechanically confined and insulated. 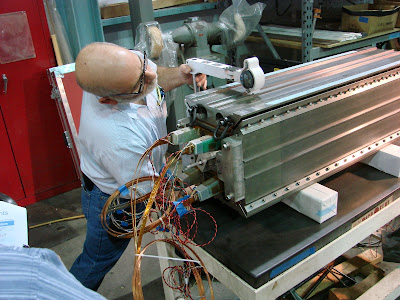 Here is a picture of the new coilpack measuring gage in use. We take measurements along the load pads to make sure the starting position of the coilpack prior to loading are parallel and perpendicular. Some of the other wires you see coming out of the lead end of the magnet are instrumentation and voltage monitoring leads. Each coil is instrumented with strain gages and voltage taps that are routed out of the magnet and cryostat to the outside world. 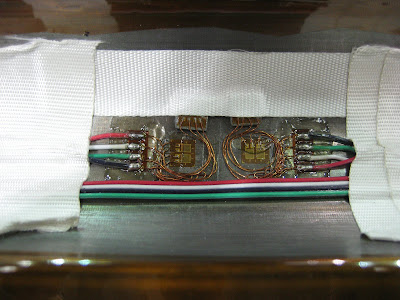 One of the strain gage stations on the inside of the bore of the magnet. There are two sets of each direction gage. One set is floating so we can compare a gage under the same conditions that is not under mechanical stress so we can determine how much force we see from magnetic and mechanical loading. Kind of like a calibration standard. 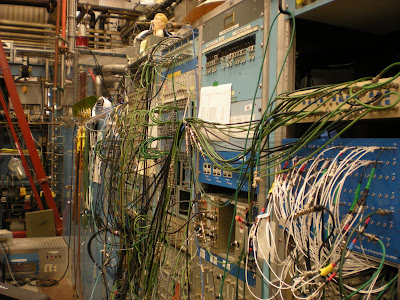 I don't know how the electrical engineers keep track of all this wiring. It always looks very mad scientist like just before a magnet test. Somewhere in there is the strain gage and voltage taps wires I mentioned. 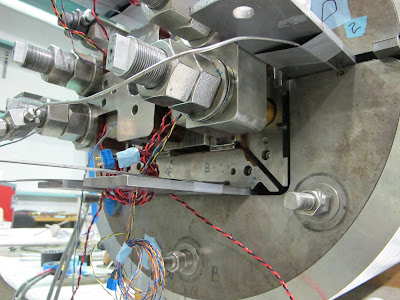 This picture shows the coil pack inserted into the magnet structure and outer aluminum shell. You can just see the load pad that I mentioned earlier on the right. The two axial loading rods pass through the load pads and help in preloading the magnet in the axial (long ways) direction. You can see this is all in a pretty tight package.

When we preload the magnet the idea is we load it to some nominal level slightly higher than what we expect to see when the magnet is under test. This pre-stressing is crucial to preventing movement and resisting the magnetic forces that want to make the coils fly apart from one another. The first step in loading the magnet is to apply some compressive force to the coils. How do we do that? 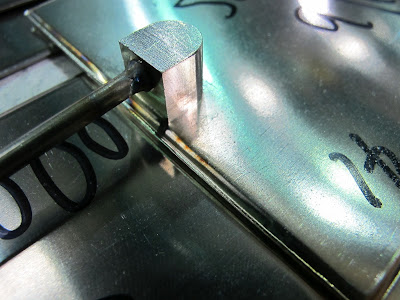 The process is called bladders, shims and keys. If you look in the picture above you can see the end of one of the bladders near the blue tape D2. The small stainless tube connects the bladder to a high pressure pump. Basically like a metal balloon, the bladders are made from thin stainless sheet and laser welded along the seams to seal them into a closed vessel. We pressurize them with water at high pressure to compress the coil assembly. To keep the pressure on the coils we insert keys and shims to take up the space during pressurization. Sort of like jacking your car up with a hydraulic jack. You pump the jack a bit and then put a block under the car to hold it up. You can now let the jack down but the car stays where the block is holding it in position.  This is similar to how we preload the magnet. 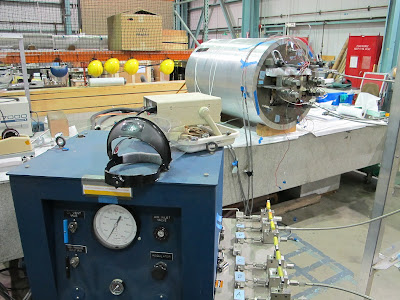 In this picture you can see the high pressure pump and hoses leading to the bladders inside the magnet. We carefully pump the bladders up and insert shims to maintain the preload on the magnet. It is a step process where we go up in small increments until we hit the desired target preload. All of this is with direct feedback from strain gages mounted on the coil windings and the aluminum shell of the magnet. As we add load to the magnet coils the stress in the aluminum shell goes into tension from the internal pressure. Much like a high pressure gas cylinder. 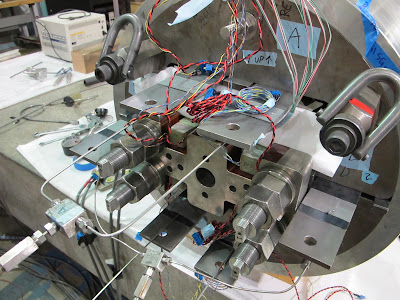 Another shot of the high pressure tubing connections to the bladders. Typical bladder pressures are in the three to five thousand psi. We have gone as high as ten thousand psi but not on this particular magnet. 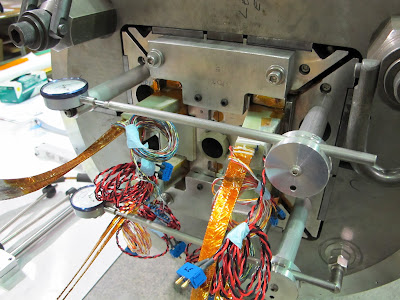 This is the lead end of the magnet. We added a couple of dial indicators to monitor how much the two load pads move relative to one another during the loading.  After several rounds of pressurizing and shimming we arrive at the target load. This is derived from the strain gage readings of the stress on the coils and shell.

The final step is to load the magnet in the axial direction using the large threaded rods. We don't actually crank the nuts down to apply the force. This is also done hydraulically and the nuts taken up to maintain the loaded position. With strain gages mounted on the rods we can more accurately preload the rods than by turning or torquing the nuts.

So all of this is just preparation and pre-stressing the magnet before we cool it down to 4.2 Kelvin. Most people know that when you heat something up it expands right? What do you think happens when we cool the magnet down? If you guessed that it shrinks you are correct. In fact we are counting on it here. When the magnet cools it shrinks considerably which is the final part of this operation. The aluminum shell that houses the magnet applies the final loading after cool down. Aluminum expands and contracts at a higher rate than the steel structure inside. This is called the coefficient of thermal expansion shorthand CTE. For each degree of cooling the aluminum contracts almost twice what the steel does causing a constricting force all the way around the magnet. If you do the math the shell shrinks around an eighth of an inch just from the cooling. It is acting like a really expensive hose clamp that holds the two magnet coils from moving when it is energized.
Posted by Tom Lipton at 5:30 PM