Ever get tired of slotted brackets and crummy set screws to provide some kind of a precision adjustment? Many times mechanical designers are asked to provide a low cost precision adjustment to locate a component or assembly in relation to something else. The tired cheap fallback systems of slotted plates and shafts with set screws lack the design elegance that mechanical designers would strive for. Time and cost considerations sometimes make these less than perfect adjusters the default choice when the time runs out and an idea is needed. Stacking multiple expensive precision linear slides orthogonally is a brute force approach to solving the multi axis precision adjustment problem. I have seen this approach used more than a few times and it always looks a bit like a gift wrapped rhinoceros. A lot of effort is spent on designs to solidly locate components in space and provide some kind of intuitive adjustment that doesn't break the budget.

What this article is about is a simple system that provides kinematic support and adjustment in all six axes of movement. To refresh your memory on all the possible movements , there are three translational movements that most machinists are familiar with, X, Y, and Z. and three angular which airplane pilots are familiar with are pitch, yaw and roll. These are defined by rotation about one of the translation axes. In an airplane the orientation of the angular movements is determined by the direction of flight. Each branch of technology has a convention for "normal" positions of the axes to further confuse us poor mechanics on the six degrees of freedom. 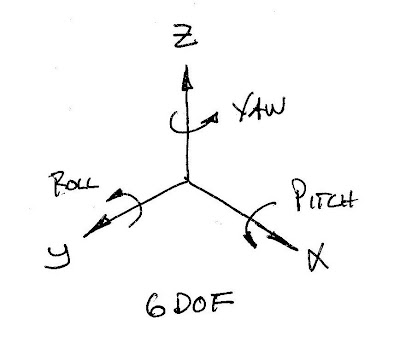 At work we use a six strut system to locate beamline elements and provide a simple way to adjust and maintain their alignment. This setup is simple and clever and more than likely has uses outside particle accelerator construction. The basic parts are just glorified garden variety turnbuckles. Instead of real turnbuckles we use stiff precision rod ends in our six strut systems to rigidly isolate sensitive equipment from vibrations transmitted through the floor. At the same time the six strut system provides precision adjustment and allows us to position equipment in all six axes to less than .001 inch easily. 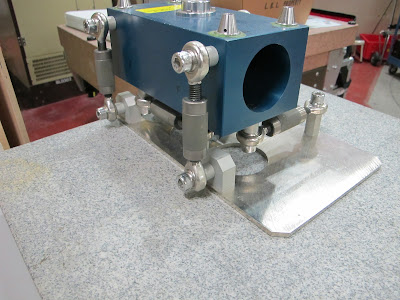 This is a small example of the six strut alignment system. Its hard to get a picture of all the struts at one time but trust me there are six. In fact the six strut system is not overconstrained and if you remove any one of the struts from the component it will fall down. 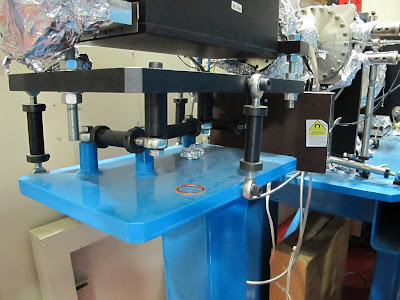 Here you can see all six turnbuckle struts There are three that typically support the load vertically or in the direction where rigidity or vibration isolation needs to be highest. The struts are oriented orthogonally which makes it very intuitive to adjust. A similar system that many people have seen in the popular press are variations on the Stewart Platform. Sometimes it is also referred to as a hexapod. Hexapods are also a positioning system that locates parts fully with six degrees of freedom. Its main drawback is higher expense and practical implementation for day to day applications. Furthermore, it lacks the easy intuitive adjustability of the turnbuckle six strut system. 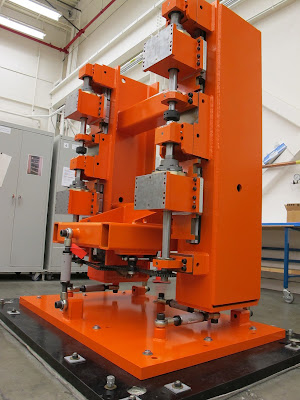 These simple strut systems have the ability to carry and align heavy loads. Not sure of the weight of this undulator structure but I wouldn't want to drop it on my foot. For maximum rigidity and vibration isolation we use crimped and swaged rod ends or off the shelf commercial rod end units that are split and a clamp screw is added. 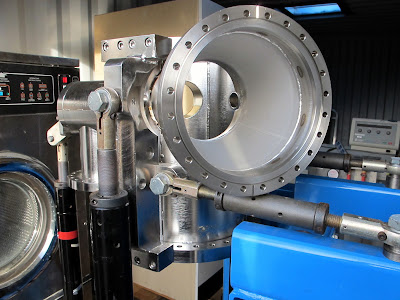 One of the other advantages to this simple precision adjustment system is its scalability. Some of the larger six struts support loads in the multiple ton range and the smallest one I have seen used #4 screws through the rod ends. Typically the struts are the "turnbuckle" type which means they have one right hand thread and one left hand thread. In special situations we fabricate differential thread struts where both rod end threads are right handed but the thread pitch is different. Differential same direction threads cancel each other with the net movement coming from the differential between  the two thread pitches. Very small per turn movements can be designed with the proper choice of threads. The choices in thread pitches are limited if you stick to standard rod ends but for special situations they are simple enough to modify or custom order from the manufacturer. 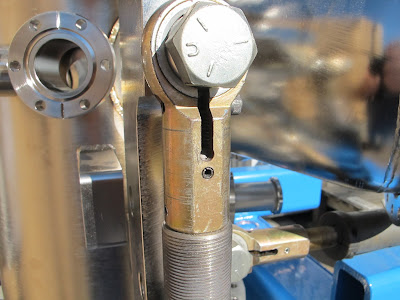 Here is an example of a off the shelf rod end that has been split and a clamp screw added. This particular unit is a female thread rod end that has a simple custom stud fabricated to turn it into a differential strut. The opposite end has a same hand thread but a different pitch. 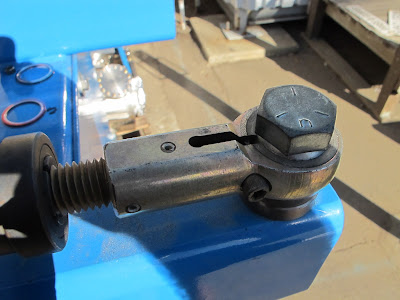 The female thread in the strut body is a split collet that is welded to a tube of the length required for the design. The collar is not used to lock the strut into a fixed length which might be your first instinct looking at the assembly. It is adjusted so that it can be moved easily with a pin spanner, but tight enough to not move if accidentally bumped or turned by hand. This preloading eliminates any wiggle in the threaded connection and keeps any bozo's from turning the strut when they put  their hand on it absentmindedly. 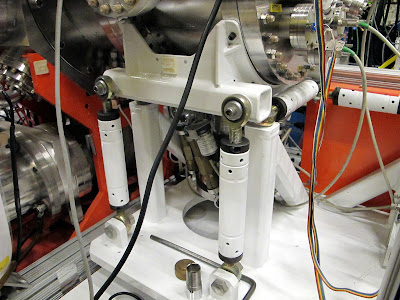 Here is a picture where you can see the collars and the pin spanner holes in the strut collets. Incidentally if you look underneath there is a hexapod stage mounted to the bottom of this chamber. Its takes a computer program and position encoders to adjust the motorized hexapod system on this manipulator. The six strut in contrast is adjusted intuitively by hand with feedback provided by dial indicators if necessary. 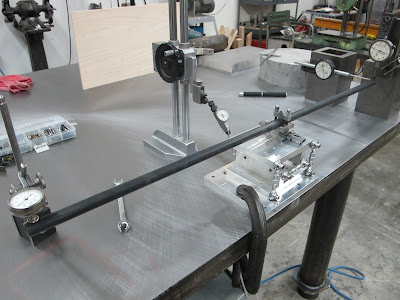 Here is a small six strut stage that I set up a little demonstration with. I actually ran out of indicators that I could put on the thing for the demo but I think four gets the point across. I started by scrambling the stage in all six axes out of its initial position by around a half inch measured at the ends of the tube clamped to the stage. I was able to re-aquire the indicator zero in less than five minutes to within a grand of the starting position.With the dial indicators as a feedback device the adjustment was straightforward. 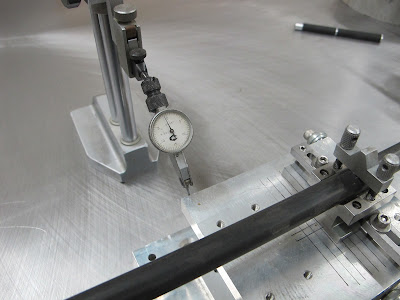 In the next example you will see the range of motion even a small six strut system is capable of. 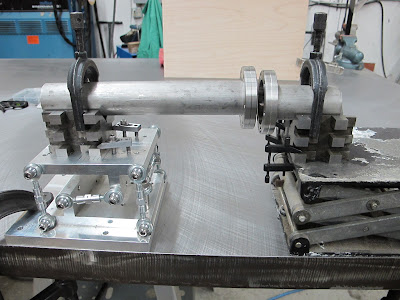 This example shows the misalignment of two pipe flanges. You can see the initial position is pretty far from where it needs to be. 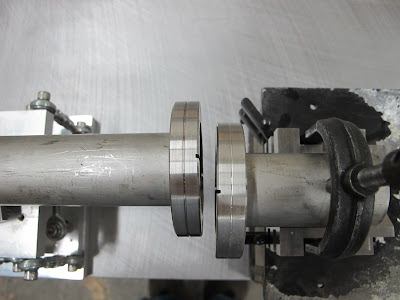 The alignment of the two flanges is actually off in all six axes of possible movement. You can see the small slit in the flange actually has to roll into position for good alignment. The struts on this little stage are 10-32 thread turnbuckle type. 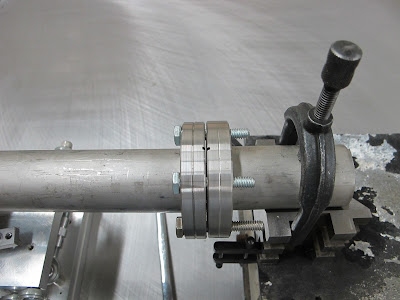 A few minutes of twiddling the struts produces an alignment close enough to insert fasteners into the holes.

So if you want to try this odd looking but clever system out here are a few general guidelines.

Keep the struts orthogonal to one another. Three in the one direction where rigidity is most important, two in the second direction where you need some translational control, and one in the direction of least need of rigidity and translational control. Use the longest struts that are practical. This reduces the crosstalk between the axes of movement from angular changes. Mount the rod ends of the part that moves so that their centers are in plane with the features you are trying to align.

This is a very forgiving, inexpensive alignment system that is capable of superb accuracy and control. Next time your backed into a corner and have your back against the wall, pull this clever solution out of your hat. Or better yet when somebody throws a hexapod out as a possibility drop this into the discussion. At first pass it looks a little wacky but trust me it is tried and proven a thousand times over. From a design point of view it is simple and elegant with no more parts than is necessary to get the job done. When is the last time you could say that about set screws and slotted plates?