People that have been following the blog know I've been hunting for a decent lathe for the shop. Over the last few months I have looked at a few but not made a decision on any of them. Either they were too small or too far outside my budget. I missed a nice one that the company sold to an employee on the day I was supposed to look at it.

Finally a lathe appeared that was in my price range and had the right features and tooling with it. One of the requirements for the lathe was the size. I need a longer lathe between centers than a typical tool room lathe. This is so I can machine some large rolls for an etching press project I'm currently designing. Of course like all things the process didn't quite go as smoothly as planned which is why it makes a good story.

It all starts four years ago when I bought an old navy surplus Doall vertical bandsaw at a high school auction. I had grand plans to collect equipment as it came up and carefully store it away until I had a shop space built or rented to put it all in. My good friend Don offered some long term storage space for some of the collection and is where the story gets going.

When I put the saw into storage It had a little accident. Actually I'm lucky it didn't kill me in the process thinking back on it. The saw weighs over a ton and I put it into a cargo container by myself with a drop trailer and a come along. During this ill advised activity I managed to knock the saw over and break the cast iron table mounts. On closer inspection of the saw it revealed there were some parts missing from the variable speed drive that would also need to be replaced to bring the saw into working order. It was quickly turning out to be one of those deals that's not such a great deal. Fast forward four years. I have found another saw in better condition and my long term storage welcome has been thoroughly worn out. Time to move some machinery. 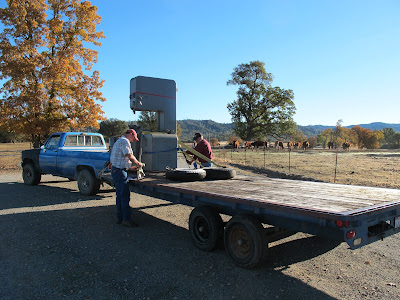 It all started with a perfect weather day. Up in the hills behind Lick Observatory we loaded the Doall using the Ford tractor with forks instead of a bucket. Relatively uneventful. One down one to go. The lathe I found was out in the central valley near Turlock. I had to get outside the bay area away from all the dealers and competition to get a decent deal on a machine. We arrived at the shop where the lathe was only a half hour behind schedule. Not bad so far. The owner of the lathe was anxious to get it out of the shop since he had drug the machine up to the door right in the way of everything. The drag marks led from the back of the shop to where the lathe was sitting in this picture. Nice. 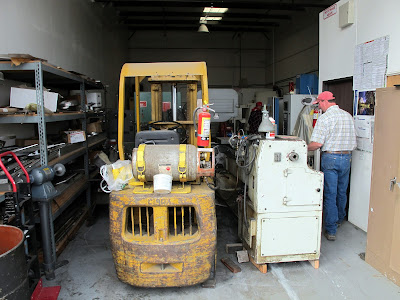 When I came out to look at the machine a few weeks ago I asked the owner if his forklift would lift the lathe. He told me no problem. I took the model number off the lathe and did a little homework on the internet. It turns out that one of the satellite shops at work has nearly the same machine so I was able to borrow a manual and look up the detailed specifications of the machine. It actually weighs about 4700 lbs. When we first got there I asked the owner if he would let me drive his forklift to load the machine. He was slightly puzzled and asked me why. I told him if he had to drive the forklift then I would give him the money once the lathe was on the trailer and not before. If he dropped the machine it would still be his which was either an incentive to do a really careful loading job, or let me do the driving. Just my luck he said fine go ahead and drive the forklift.

Before I hopped on it I asked it there was anything I should know about before I got going. Oh yeah, the brakes don't work was the only thing I needed to worry about. Its okay he said, the parking break works great. Here we go was all I could think of. 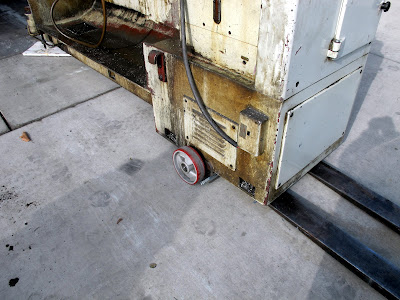 I test drove the forklift around the parking lot to get used to the hillbilly brakes. The parking brake did work good you just had to remember to keep your hand on the lever all the time. For moving this job I spent a little time and fabricated a special dolly for moving the lathe in tight quarters. I wasn't sure the owner would have it out near the door so I was prepared to move it into position with the my new three point lathe dolly. The large wheels are off a pallet jack and the front is a roller bearing skate that I added a swivel pad to. 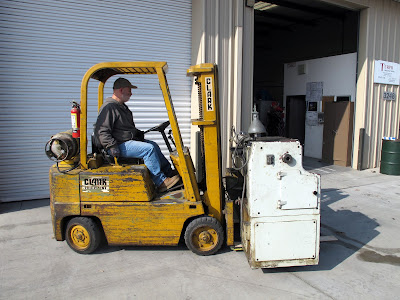 When I hop on the forklift somebody has stenciled the capacity on the mast in big black letters. Capacity 4000 lbs maximum. Oops. The lathe weighs 4700, Houston we have might have a problem. No choice but to do a little test lift. Fortunately it seems to be fine. I sucked up as close to the machine as possible and it seemed to be stable and not light on the rear end of the forklift. So far so good. Notice the big mitt on the handbrake. We still have to get it on the trailer. 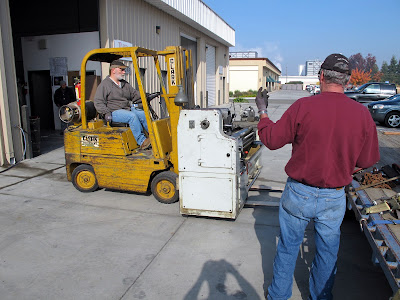 The moment of truth is coming up. I'm hating that stupid handbrake right about now. 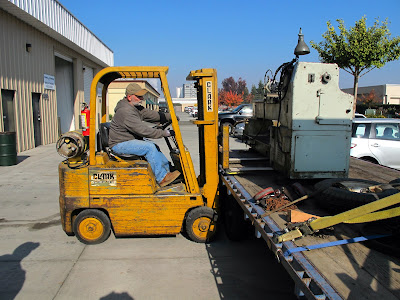 Whew. I sure felt better once the lathe was up on the trailer. In fact I think somebody had de-rated the forklift when they stenciled the capacity on it. I was able to pick the machine  up near the end of the forks to get it more centered on the trailer. Notice the slats of thin plywood on the forks. This is a trick to keep the machine from moving on the steel forks when you least want it to happen. A greasy steel machine on a pair of greasy steel forks it almost as good as a ball bearing but not quite. A thin layer of wood or even cardboard will keep the load from shifting on the forks. I'm feeling pretty good right about now. Everything was going as planned even with a few wild cards thrown in for fun. This is about the time Murphy pops his head up and says hello. 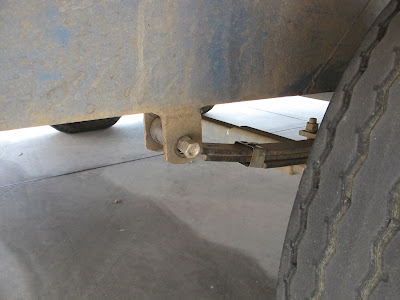 As were tying the machine down to the trailer I notice some stuff I'm not too excited about. Keep in mind we have already loaded a one ton saw and a two and a half tons of lathe and tooling on the trailer. What kind of hillbilly junk is this? Double nuts on an egged out hole wasn't too bad compared to the other end where, 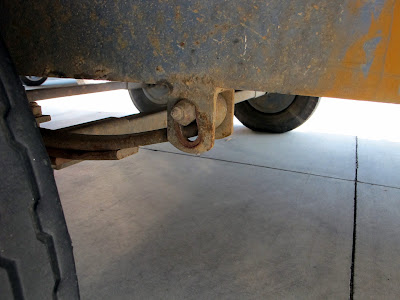 it was really lovely. Geez, now I stressing out again. My buddy Don just brushes it off and tells me this trailer just hauled a load of steel to Santa Barbara and it was fine, besides he has some extra bolts in his toolbox just in case. Oh, that makes me feel much better. 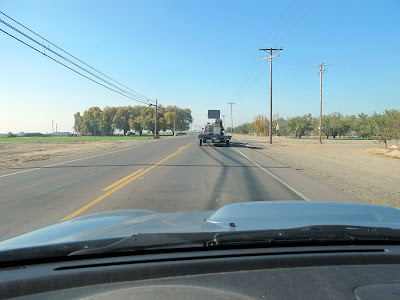 You cant see them but there are some white knuckles on the steering wheel. This was my view for the next three hours. I even started to feel optimistic when we made it over the Altamont pass without any problems. 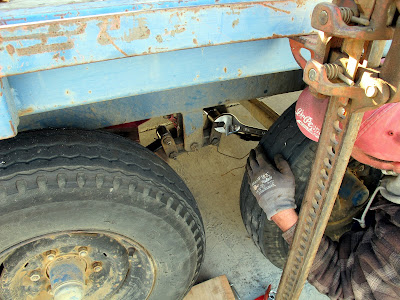 Time changes everything. As we headed down into Livermore I noticed what I thought was a puff of smoke from the right side of the trailer. I shrugged it off as some dust that kicked up when the wheel got close to the fog line. The next few minutes were fine so I started to relax again. Dang, there it is again. A little puff of what looked like smoke. Now I'm on alert and keeping a close eye on the right side of the trailer. On the third time I knew we had some kind of trouble because I got a whiff of tire smoke with the visible puff of bluish smoke. I called Don on the phone and told him to pull over at the next exit. Turns out one of the leaf springs actually broke so only one set of springs was carrying the load. This caused the tire to touch the frame of the trailer and put out a little tire smoke. The machinery gods are laughing. 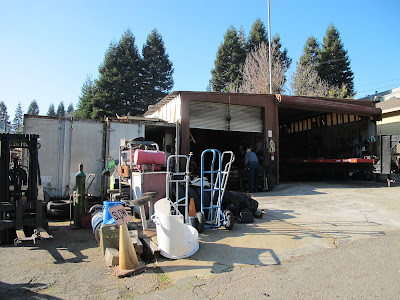 A machinery movers best friend is a smartphone and Jacks trailers in CastroValley. They had a couple of sets of leaf springs with the right eye centers for the sick trailer. These guys were great and saved the day. If you ever need anything trailer related call these guys and get fixed up like we did. They got a big old lab shop dog and don't take credit cards. 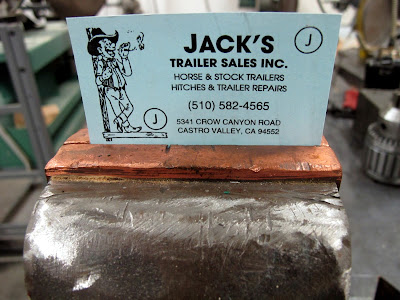 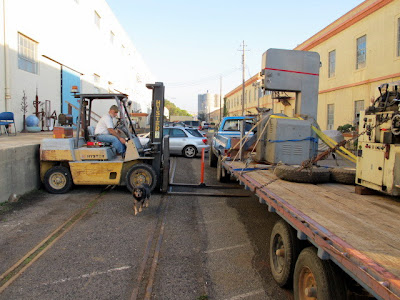 Well after the minor detour of replacing the leaf springs on a trailer with nearly 8000 lbs of steel on it we made it back to the shop. Took two guys on the high lift jack to notch another click into it. Time to fire up a real forklift not some de-rated brake less junk and unload the trailer before it cracks in half. Ernie the shop dog is supervising the rigging operation. 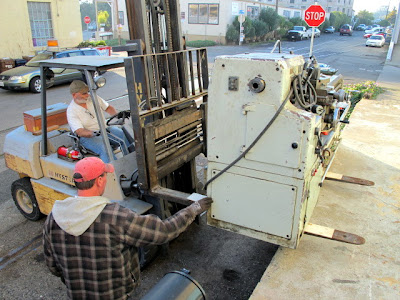 Almost there. It was a relief to get the lathe on the dock after all those hours of excitement and anticipation. We used the new three point dolly to move the machine into the shop. 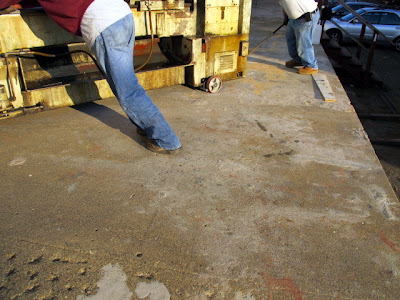 On the rough concrete of the dock it took a little persuasion with a bar to get the machine moving. Once we were inside on the smooth warehouse floor one person could push it pretty easily. In fact its hard to stop with all the inertia once it was headed in the right direction. 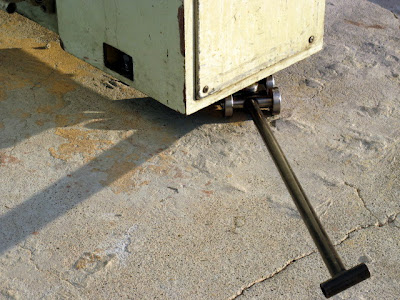 Here's a shot of the front skate wheel and swivel pad. The tube is used to steer the skate as it rolls. With a three point system the machine always stays in contact with the ground even when there are dips and humps. 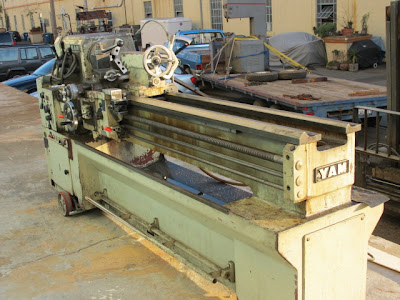 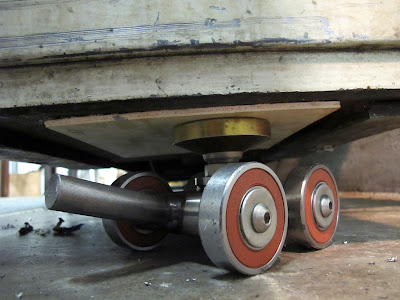 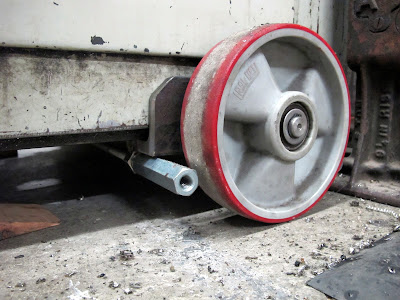 All in all a very successful trip. I got a nice lathe and spent some quality time with friends. Special thanks to Don and Uncle Gary from Hill-Tech engineering for supplying the very finest machinery hauling services and equipment. I know I owe you big time now which has got me really worried. If everything went perfect I wouldn't have a good story to tell and know what to look out for next time you trot that trailer of yours out. I did have fun and learned a few things in the process. Thanks for looking. 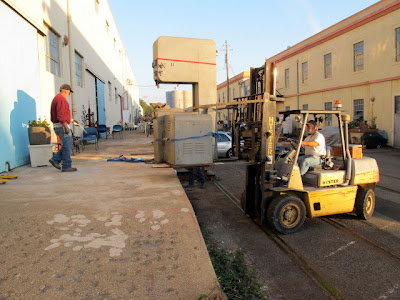 I almost forgot. The old Doall went on Craigslist the next day. A guy from Santa Rosa came down in the rain and picked it up the other night. He was all excited to get a nice name brand saw for a song. He's looking forward to getting it up and running again.