Go Ahead, Make My Day.

Have you ever had one of those days that doesn't go according to plan? Today was one of those days. One of my esteemed neighbor acquaintances asked me a few months ago if I could help him unload some machinery with my forklift and place it in his shop. What I told him was he couldn't borrow the forklift, but I would be happy to unload it when he got the machines down to his place.

Fast forward three months. He contacted me recently and said he was finally ready to move the equipment and was I available to unload it. We scheduled it for a weekend day so I didn't have to take time off work. Harold is retired and has all day and all week to mess around with stuff like this. This last Saturday was moving day. Liftoff time was supposed to be ten am. I started to get an inkling that something was not going according to plan when a call came saying there was a minor hiccup with the trailer. No problem, I have plenty of stuff to work on it the shop. Give me a call when your loaded and headed my way. I had un-tarped the forklift and fired it up in anticipation already.

I'm working away on the lathe when my phone rings. I didn't realize it until the call came that my neighbor was running pretty late at this point. On the phone he says, "If you had plans to do something later today then you should go ahead and do them." Why I asked? He proceeds to tell me that they dumped one of the machines he wanted to move in the parking lot as they were loading it. Opps. My morbid curiosity has kicked in now so I ask If they need any help. Note to self. Be careful what you volunteer for.

The crash site was only a couple of miles away so I jumped in the car and headed over making sure I had my camera with me. 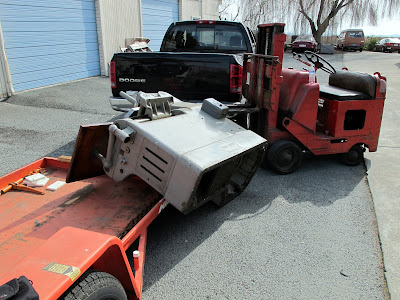 This is the sight that greeted me when I walked up. Not the worst rigging boo boo I've seen but definitely disappointing. Nobody got hurt and the only damage was to the machine itself. There were some long faces and a note of defeat in the air. 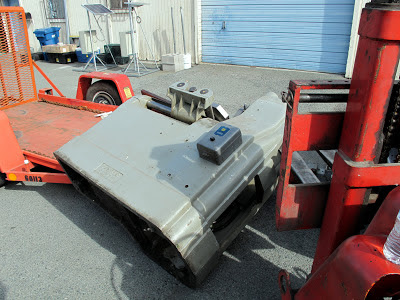 The ancient 1941 Towmotor forklift just wasn't up to the task. Apparently the rear wheels were lifting off the ground when they tried to lift it onto the trailer. As it tilted despite the effort of two guys acting as additional counterbalance the oily machine slid off the bare forks and flopped onto the tongue of the trailer. First things first. We had to get the machine stood back up and then discuss what the game plan was from that point to get it on the trailer. Machine is a WW2 vintage Kearney and Trecker Autometric Jig Bore and Layout machine Model A. Found the weight later on the web at ~3000 Lbs. 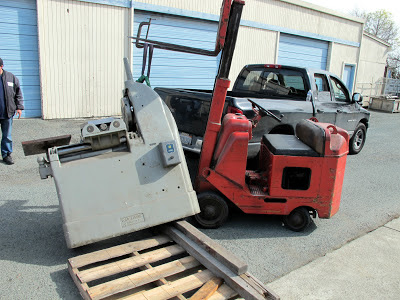 The little towmotor could handle the up righting since it didn't have to lift the entire weight of the machine. Some strategically placed dunnage keeps things from getting out of control in the opposite direction. The forklift is a cut down version of a full size lift and is used to drive into the backs of trucks to unload them. It only has a few more inches of lift left in the picture above. With some short slings we were able to rig it around the casting and lift it from there. 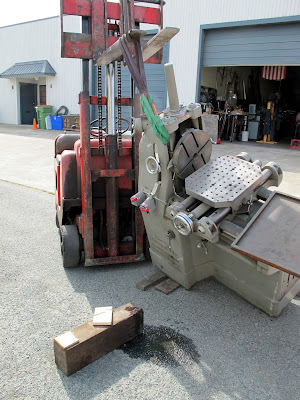 The forklift was a real gem. No throttle control at all with the sticking Zenith carburetor. Fast idle was all you get. If you accidentally stepped on the throttle you got stuck wide open and have to manually pull the butterfly closed. The side cover on the engine compartment was left off for just this reason. Gee don't you think you should take a look at the carburetor and see whats wrong? At least the brakes worked on this one unlike the Yam adventure. We were able to stand it back up without any rigging excitement. I headed back to the shop for some additional wood blocks and tie down chains with binders for the next challenge of securing the machine on the trailer. 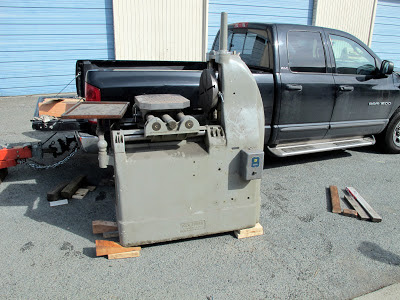 Back standing up the way it belongs on proper blocks. Everybody is starting to feel better now. Unfortunately the tired Towmotor was not up to the task of getting the machine on the trailer. On the drive over  I noticed a steel shop down the street using a larger forklift to move steel around in their yard. I suggested they go and negotiate with the owner to borrow or rent the lift for a few minutes to get the machine on the trailer. 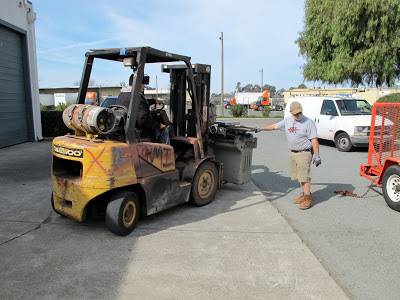 It sure pays to have the right tools. Harold was able to negotiate a forklift and the operator. This forklift made short safe work out of getting the dinged jig bore on the trailer 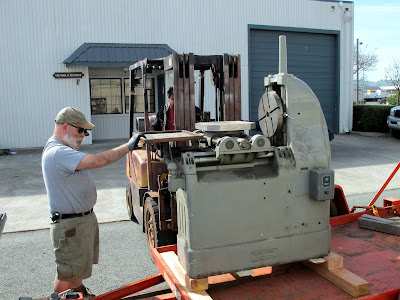 Next hitch in the deal was the rental trailer. It was intended for moving wheeled equipment like bobcats and ditch diggers, not jig bores. It had a four inch lip all the way around preventing us from placing it directly on the deck of the trailer. We had enough blocks to raise it to clear the lip of the trailer and allow the forks to come out. The operator was experienced and confident making it a pleasure to work with him.

The Towmotor had one final task in this adventure. We had to adjust the tongue on the trailer to get the ride height set correctly. This required an adjustment to the hitch height. Because of the single axel and size of the trailer we had to load the machine much too far forward on the trailer. The tongue weight must have been pretty good judging from the tail end of the pickup. 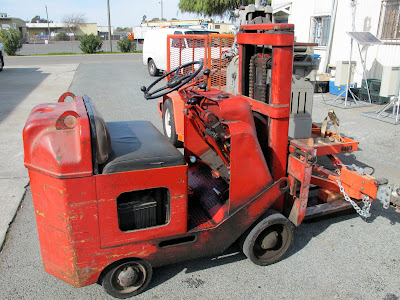 We used the forklift to lift the tongue up instead of hand cranking the wimpy jack mounted to the trailer. As we were hooking up the trailer to the truck my neighbor says he has decided he doesn't want the machine any more.???? Apparently he got it for free in what I assume to be working condition. Now that it needs some work to get it back together he has lost interest in the project. As a gesture of appreciation he offers the machine to me. Whoa. Can I think about it for a bit? Sure he says, you have two and a half miles to make up your mind. If you don't want it its going to the scrapper.

I'll give you two guesses what I said and the first guess doesn't count. 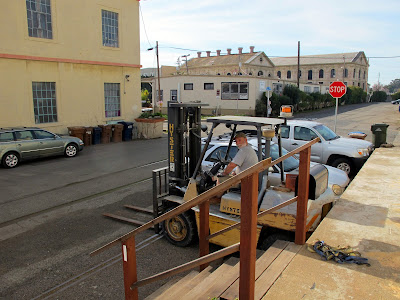 Nothing like a new machine dropping out of the sky into your lap to put a smile on your face. 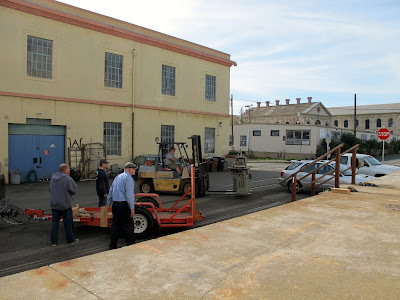 The Hyster barely noticed this pipsqueak machine balanced out near the end of the forks. Nothing like the right tool at the right time. 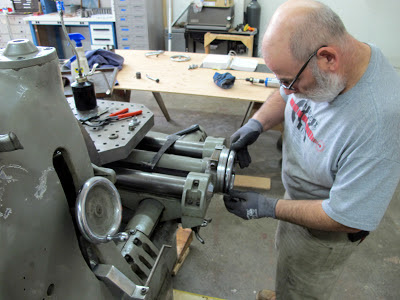 With the machine safely inside the shop I surveyed the damage from the rigging mishap. Fortunately the damage appears to be mainly cosmetic. Closer inspection may reveal something else. 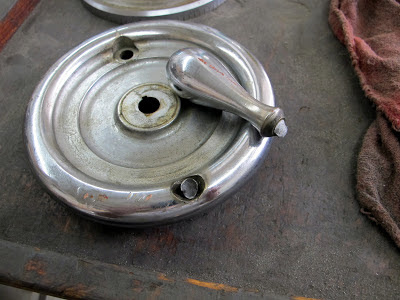 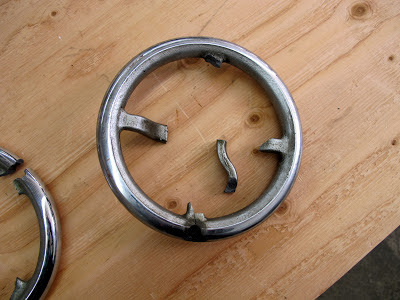 So far its looking like a couple of busted handwheels and some gouged paint. Not bad for an afternoons work. 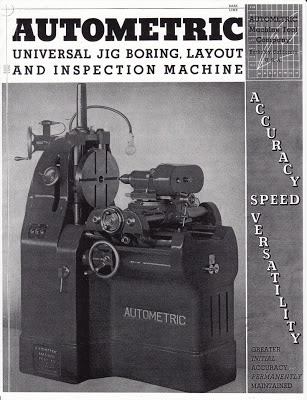 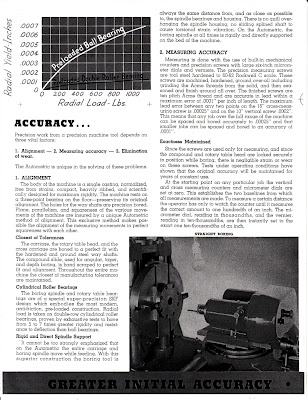 Harold says he has more stuff that goes with the machine that he will drop by. I can hardly wait.