There is something lacking in many modern mechanical components. The plain utilitarian aspect is partly driven by cost considerations and manufacturing optimization practices. Why do we fall in love with old machinery and equipment? Many old machines are visually pleasing as if the designers really cared that the visual impact of the machine was an attribute worth investing in. Sadly most of the demise of art in machinery is cost and profit driven. We can all appreciate nice looking machines but are voting is generally dictated by our checkbooks.

I was talking to an engineer friend of mine on this very subject and he had a pretty good line of reasoning worth sharing. Before the invention of automatic machine tools many machine parts were cast in steel or iron. All of these parts had to have foundry patterns made for them at some point. There is a  big fundamental difference in the manufacture of something like a machine hand wheel that is cast and one that is machined. The hand wheel is just a simple example of the potential for adding some pleasing aesthetics to an otherwise mundane part.

The modernization of some of these manufacturing processes has eliminated most of this decorative aesthetic in machine parts. Modern generally means spartan, or clean crisp simplified lines. Is it better? I like the modern style when its well executed with thought behind it throughout the article or machine.

But what I wanted to talk about in this article is something that old time machinery buffs all over can agree on. Who doesn't like a nice old time cast iron hand wheel or pulley? In particular one with double curved spokes. There is something cool about the curved arms and legs of a simple article like a wheel that give it life at a basic level. 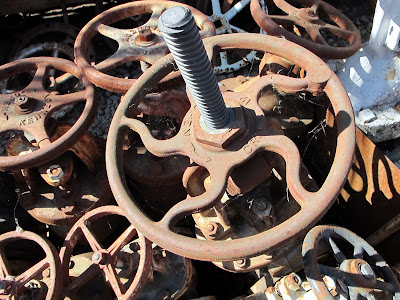 A simple valve handle with double curved spokes. It looks poised to turn all by itself. All the operator has to do is give it a little nudge. 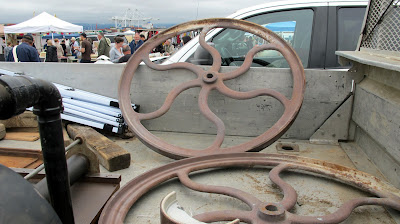 These pulleys were at a recent flea market for $400 each when I passed them in the morning. When I walked by a couple of hours later they were both gone. Somebody made something cool out of them. 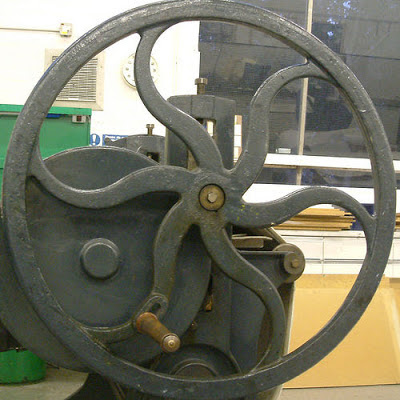 And we finally come to the actual subject of the article. This is a handwheel for a fine arts etching press. The hand wheel is the signature part of a high end etching press. The large wheel diameter gives the operator fine control of the printing process with low human power input. Most presses have some kind of gear reduction to further reduce the force on the operator. A few presses have hand wheels in the five foot diameter range. 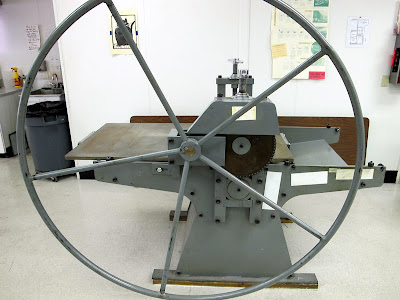 About six years ago I built a small etching press for my wife to print small etching plates with. It was really a stop gap for building her a larger press. Well the time has come to get moving on the big project for real. I have laid the groundwork for building the press in my home shop. A few items like the lathe were selected on their ability to produce the needed parts for the machine. A crane and forklift were added for good measure and spine health. I figured I might as well start with some of the more complicated bits of the machine. The hand wheel and drive system are first on the list.

I wrote a blog article and posted a YouTube video of the heart of the system. The press I'm currently working on will be larger than the French American Tool press in the picture above with a much more interesting handwheel. The current design projections put the final weight around 3500 lbs to put the project in perspective. 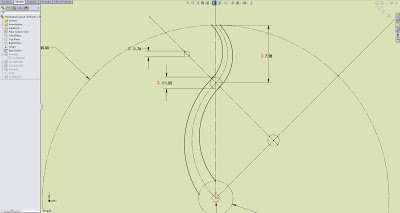 Here is the layout of the handwheel in Solidworks. My goal was to try to duplicate the graceful tapering curves like we see in old cast iron handwheels. I set the Solidworks sketch up and drove some of the proportions with equations to allow me to create handwheels of almost any diameter by changing one number. The layout is interesting in how the arc tangencies are created. If folks are interested I will do a separate article describing how to do it. Post a comment if this is something you would like to see. 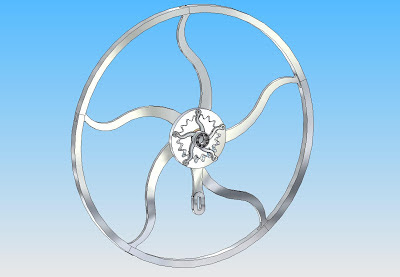 Here is the Solidworks model of the handwheel sub assembly and Wabble drive for the press. You can see the motif of the press is the curved spokes. The arms of the Wabble output follow the same layout. 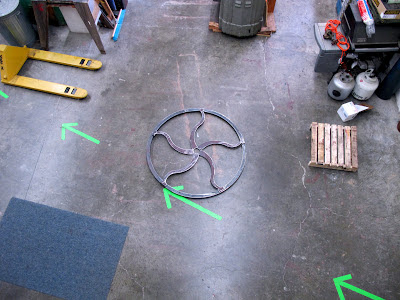 Here is the beginnings of the handwheel for the Ox tool etching press from the layout above. Looks kinda dinky right? 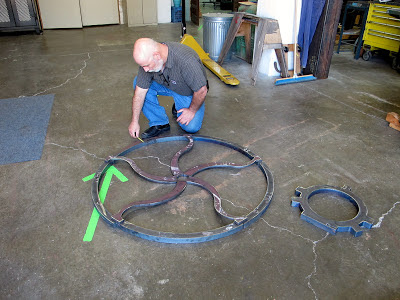 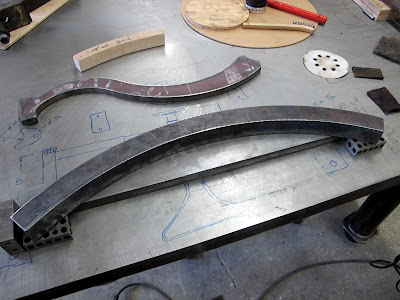 I was worried about the open C shape moving around when they oxy fuel burned the profile so I had it cut larger to allow me to machine the profile accurately. I don't want the rim to run out much so it will have to be carefully put together. Here I am preparing the blank for machining. I weld it to a backing bar that is then clamped in the vise allowing me full access around the profile with a tool. 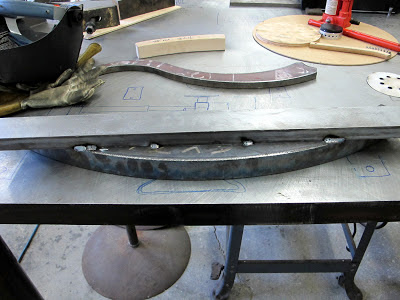 Even in steel not much weld is required. You just have to get it in the right place and not cut it away! 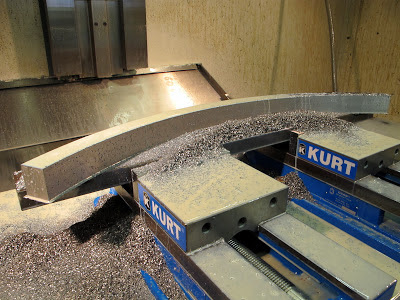 Here is one segment after profiling. I used a one inch diameter high speed cobalt fine pitch roughing end mill made by YG tools that I cant say enough good things about. Two passes three quarters deep and approximately a quarter inch on the periphery. Three hundred fifty rpm at six inches per minute feedrate. One tool removed maybe forty pounds of material and is still fresh as a daisy. 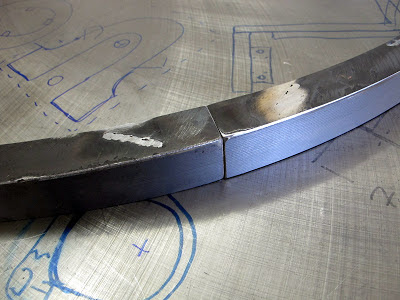 Here is the finish left by the end mill. I have cut off the backing bar and smoothed the welds. Eventually the rim will be rounded off so it feels better in the hand. These joints will be weld prepped and then blended for an invisible seam. 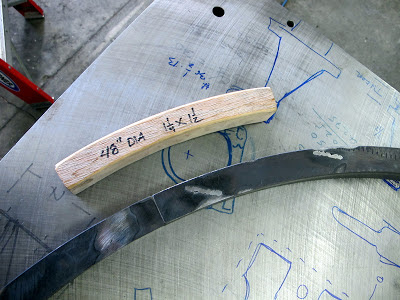 In this shot you see the wood sample I gave the "customer" for approval of grip size and rounding. I have some serious grinding in my not too distant future. 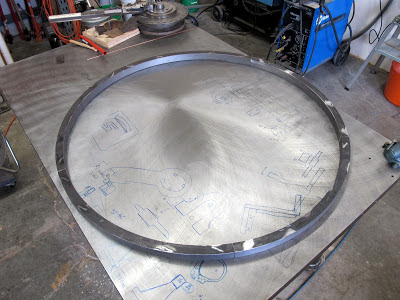 All five segments sitting together on the weld table. It measures right on the forty eight inches. There will be notches cut at the rim joints to insert the spokes to make a rabbet joint. Next will be an assembly fixture to make sure the segments are aligned in as good a circle as they can be for welding. 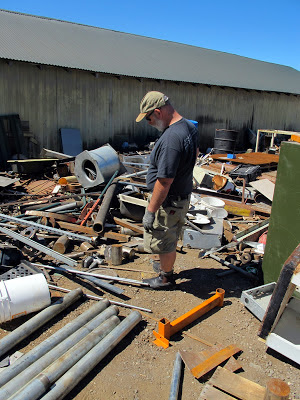 Eyeballing the center hub material for the handwheel at one of my favorite scrap yards Bataeff Salvage in Santa Rosa.