A few weeks ago I proposed a follow along project on my YouTube channel oxtools. A viewer suggested an interesting problem involving indexing. His problem was how to accurately index 127 divisions for making a special gear. This might sound trivial at first glance but it quickly becomes difficult with standard tools and indexing devices.

The basic problem is 127 divisions is a prime number. To use standard circular dividing techniques requires compound indexing to achieve 127 divisions. Very few readily available and affordable dividing heads are equipped to do compound indexing without some modification. So what to do? The need for 127 divisions crops its head up when changing the gearing on a manual lathe to switch between inch and metric threading. As it turns out a factor of 127 happens to be 25.4 Starting to sound familiar now?

So now its actually an interesting project which is why were talking about it here. What I proposed in a video is to modify a standard cheap 5C collet indexer in a simple way to handle the 127 problem and make quick work out of typical spacing operations in the average shop. 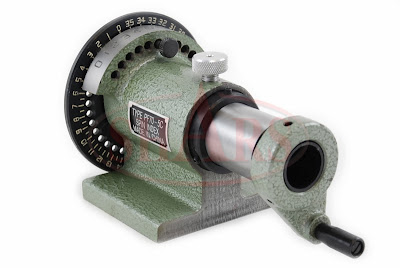 These 5C Spin indexers are readily available and cheap at around $50 plus shipping. Many folks already have one of these indexers for the very same reasons. The project involves making some additional parts that allow the indexer to quickly index common divisions much like the common but much more expensive super spacer.

These units can already index 360 divisions with the help of a one degree pin vernier. Our modifications will make it quicker and simpler for small numbers of divisions while allowing us to directly index odd numbers like 127 and fractional angular indexes such as 7 or 11. Its limitation will be the ability to create the needed index plates and fit the desired number of hole on it. 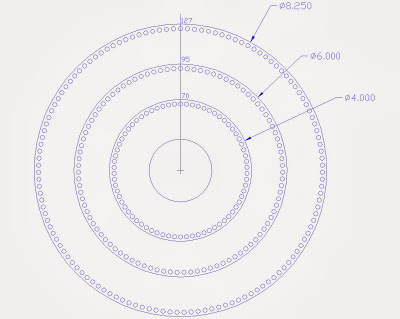 Here is an example of an index plate with several patterns of equally spaced holes in it. The outermost circle of small holes has 127 equally spaces holes in it of 1/8 inch (3.17mm) diameter with approximately the same amount between the holes. As you can see in the drawing the disc needed to contain all these holes is pretty large. So large in fact that the stock indexer will not sit on a milling machine table without elevating it with this disc mounted. The maximum diameter that the stock indexer will support without a riser is roughly 5.6 inches. 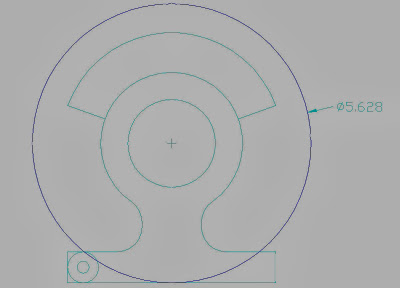 In this shot you can see the maximum sized disc that can be used on the standard spin indexer when it sits on the machine table. So how do we get the desired 127 holes in a disc that will fit on the indexer without raising it off the table? 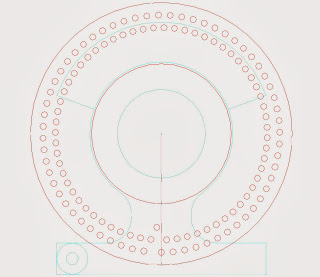 This is how we do it. By changing the radius that some of the 127 holes are on we can now put additional circles of holes and reduce the diameter of the disc to something that fits. The trick is that the angular spacing between any adjacent holes is exactly 1/127 of 360 degrees. The radius of the circle that the index hole lies on makes no difference as long as it lies on a radial line from the center of rotation of 1/127 of 360. 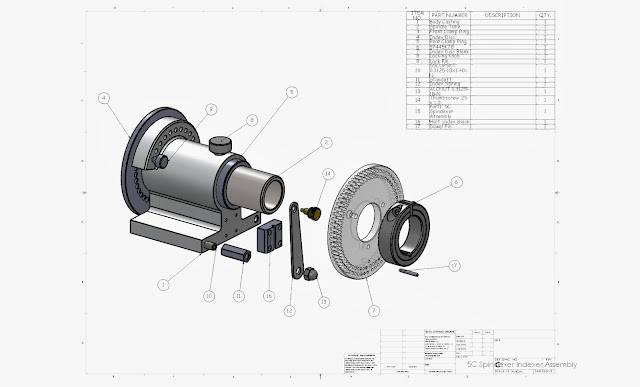 Here we see the needed parts to convert the stock 5C spin indexer to a spindexer indexer. In this example we show the 127 hole plate which is a very special case. For most folks a couple of different plates with some common divisions 2, 4, 6, 8, 10, 12 etc will make the most sense. The example of 127 holes is just to illustrate a method for making higher number or difficult number index plates of a small diameter. Obviously some of the common divisions can be indexed using the original plate and pin. The additional index plate speeds repetitive indexes and eliminated any possible errors of reading the angular scale.

The tapered arm is the index detent pin for plates with rows of holes on a single radius. It acts as a flat spring and engages the hole in the index plate with a tapered pin. To do higher order indexes with multiple index hole radii  such as 127 holes it is necessary to use the half index block part number 16. This slotted block allows you to disengage the tapered pivoting arm and re-engage it in another set of index holes on a different radius. The half index block is accurately located on the spindle centerline to avoid any errors caused by angular shifting.

To create the index plates the array of holes is put it using ordinate positioning in X and Y instead of angular indexing. Following the established jig boring practice of locating circular patterns accurately with this method is well understood and documented in books such as "Holes Contours and Surfaces" by the Moore Special Tool company.

The ability of the average shop to position accurately in X and Y rectilinear coordinates is higher than the typical ability to discriminate small angles. A simple milling machine equipped with a digital readout can make short work of making any desired index plate.

What follows are the drawings of the parts needed to modify the stock indexer and make it a spindexer indexer. Builders are encouraged to modify the design to suit their available materials and abilities and desired levels of embellishment and artistic style. 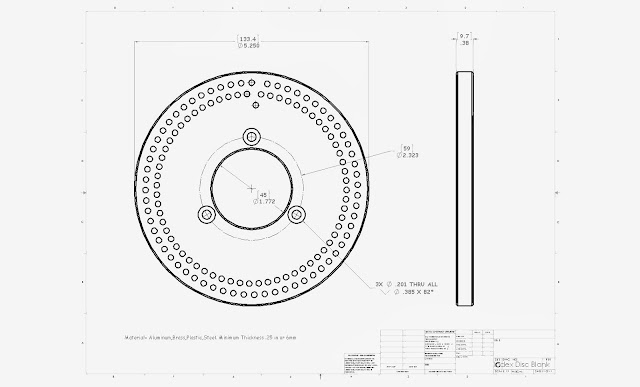 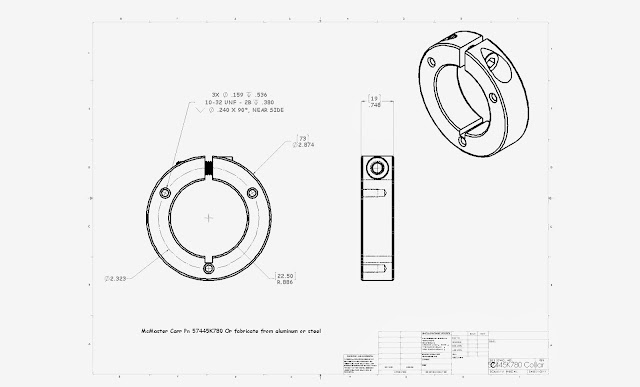 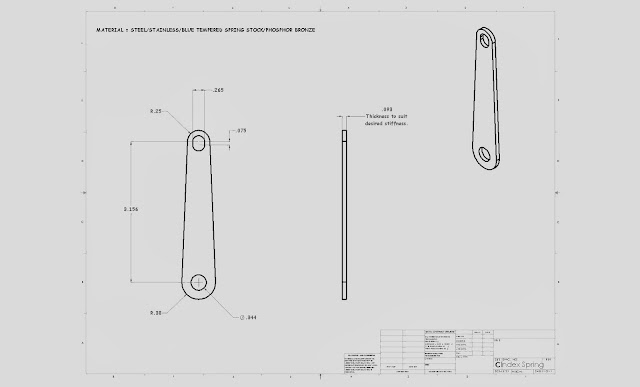 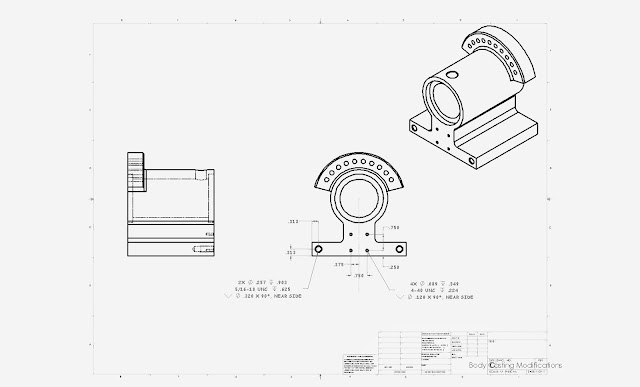 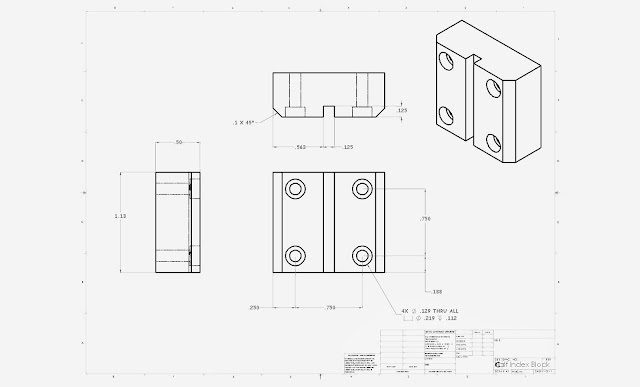 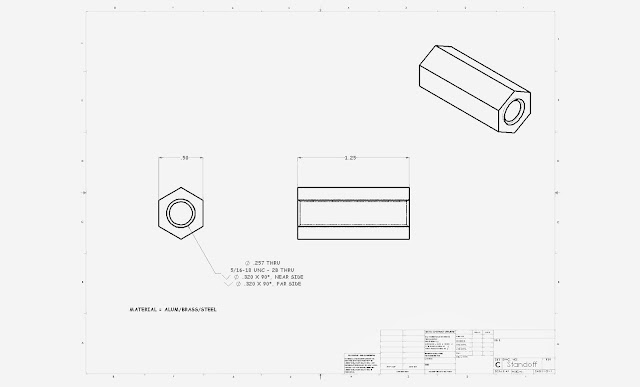 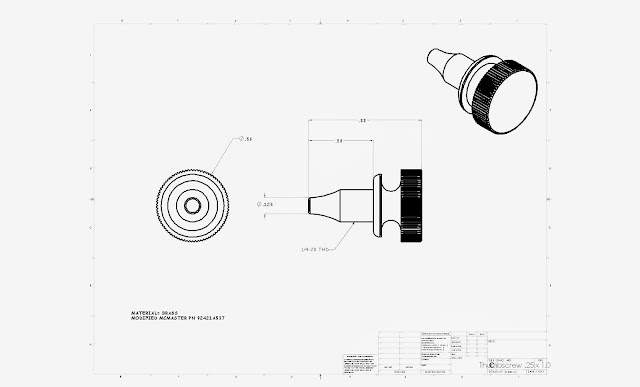