Well this is my first blog article in quite some time. I apologize for the long interval between posts. Lately I have been focusing on my Oxtoolco YouTube channel during the last few months building it up into a pretty good spot. So far so good. its taken off and surprised the heck out of me. If you like metalworking, tools and things mechanical then check it out.

This week I got to do a really fun job at work. Fun at work for me is a relative thing. Whatever it is it needs to be challenging and new and hopefully a little bit weird. The repair job I did for a materials researcher fits the bill to a teacup. 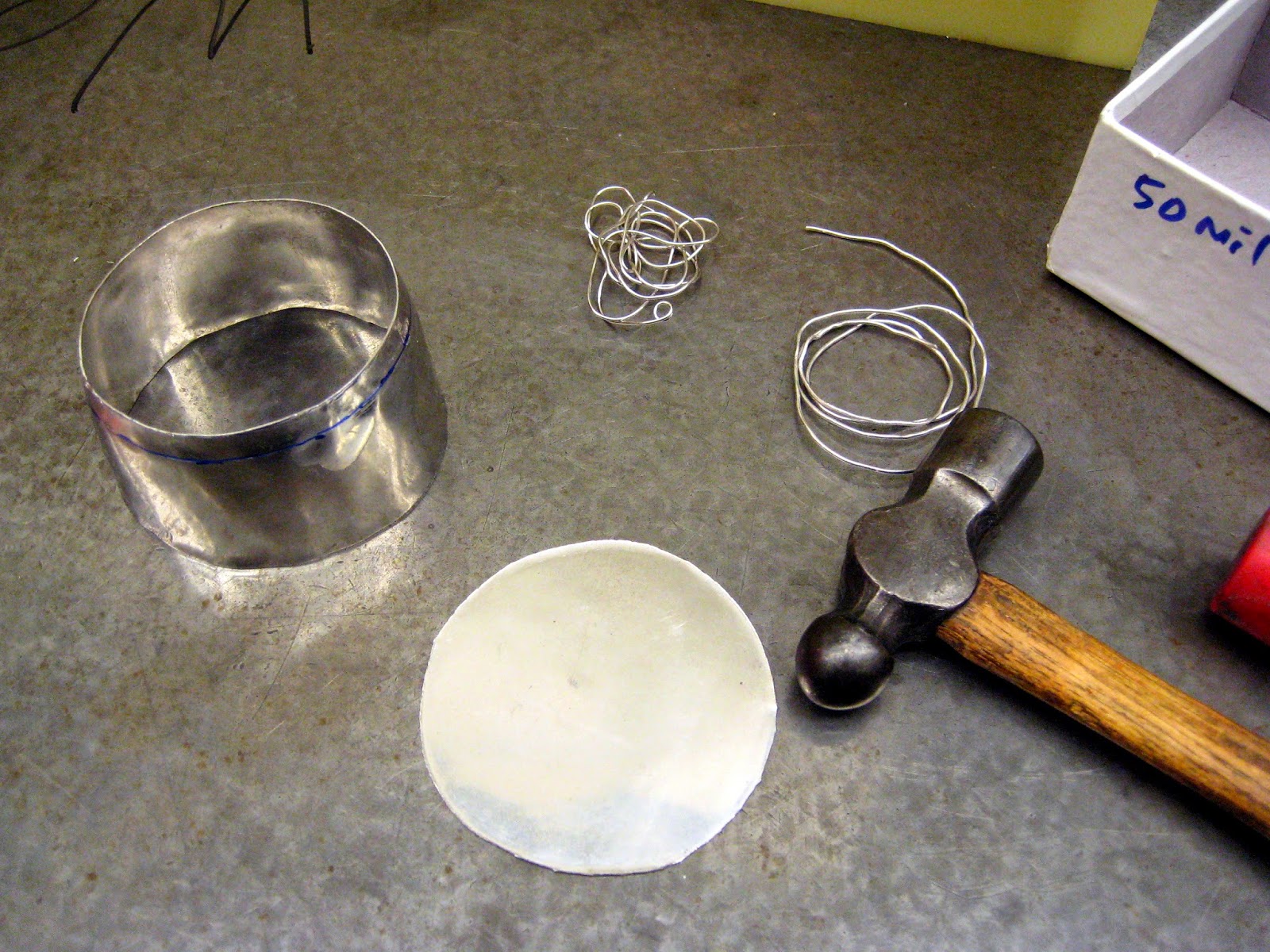 This is what I started with. Some sheet metal bits and a two different filler wires. What were looking at is a fairly large Platinum crucible. The body is drawn from a single piece of platinum and ended up approx .030 (.75mm) thick. The circular disc that will make up the bottom is a little thicker at around a 1mm. The two coils of wire are the filler rod for welding the two together.  Our materials group has the ability to recycle the material and make it into whatever form we require. Sheet, plate, rod and wire. Huge presses and wire drawing stands are right at their fingertips for just this kind of work. 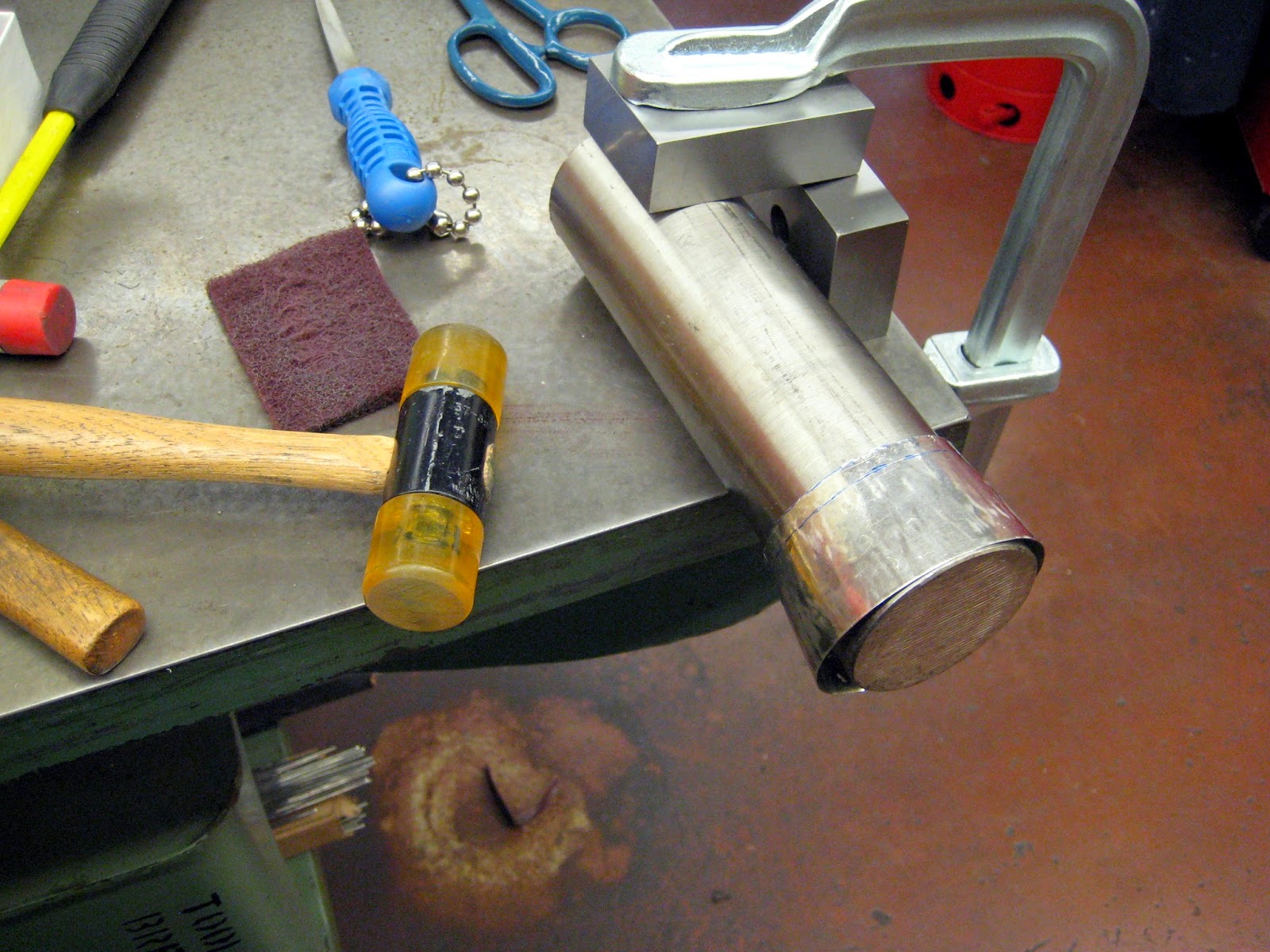 I started by plannishing (smoothing by hammering) the body to round it up and prepare it for trimming. I'm using a soft faced hammer to lightly tap the ring without stretching it. A metal hammer against the metal mandrel would stretch the material and cause warpage and thinning. All I want to do is make it nice and smooth and round for the next step fitting the bottom.

The back story on the crucible is that it had been used to melt and fuse special glass compounds for research into energy efficient windows. The compounds being melted are hot enough to cause hot shorting in the platinum and failure in the original joint. Our materials department rolled a special higher temp alloy to use for the bottom of the crucible in the hope it will work better for this hot glass melting application. 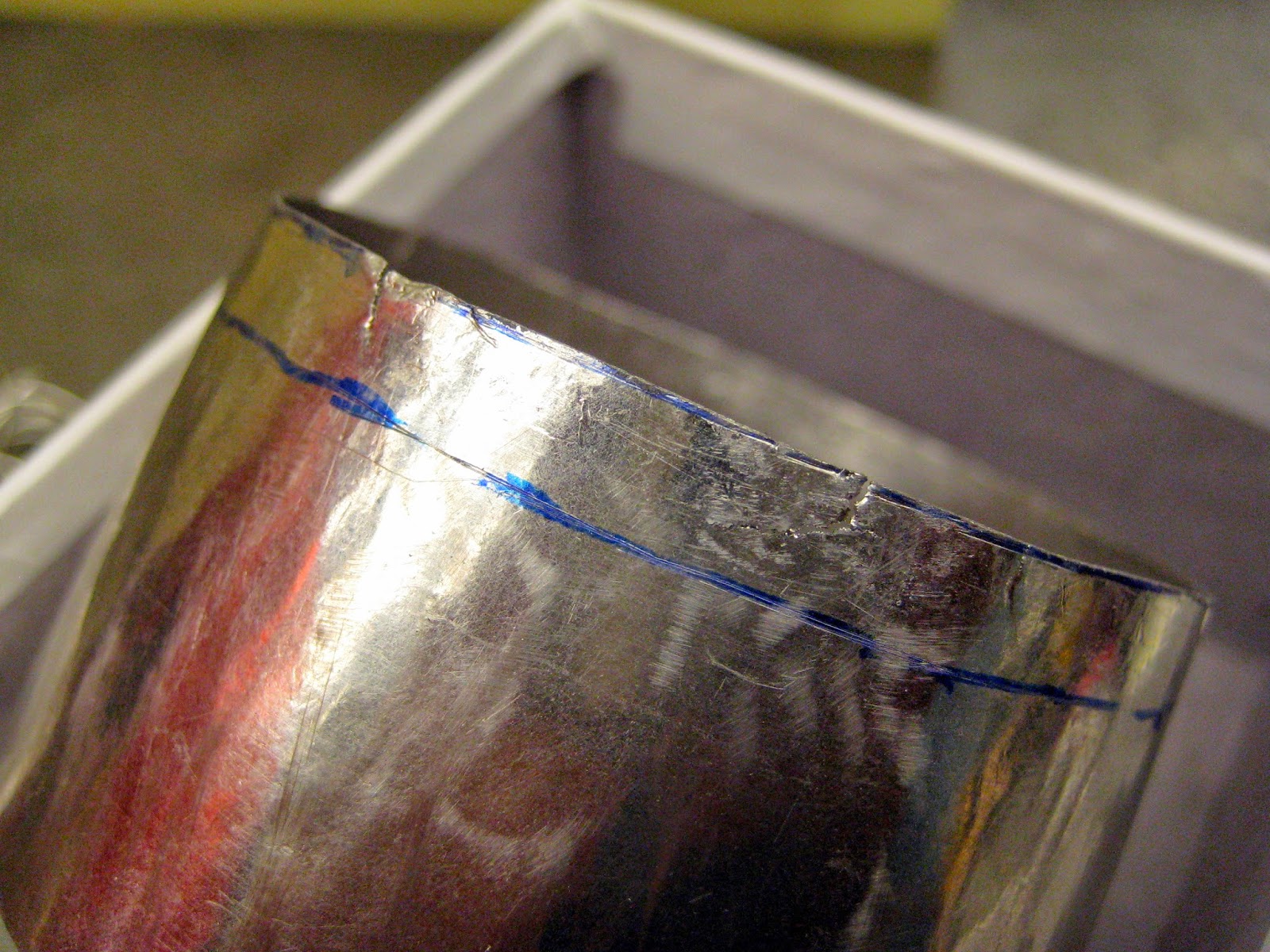 Here you can see some cracking in the edge where the old bottom failed. Some of this is from me plannishing the material on the mandrel. I will be trimming it back to the lower blue line to make a nice clean edge for the new joint. 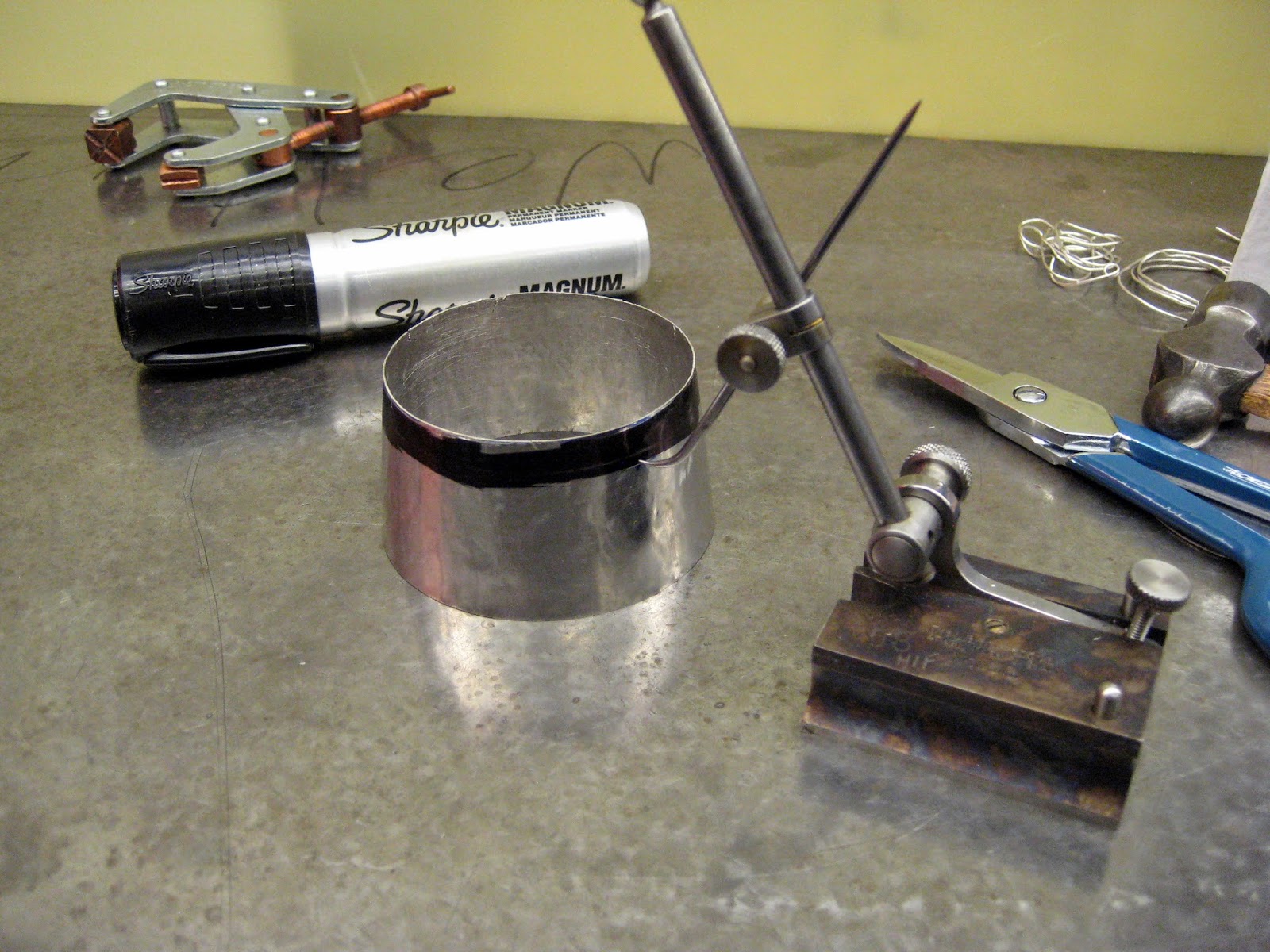 After I got the body nice and round the ends need to be made parallel. The side on the surface plate I just used some sandpaper to get it flat around the rim. I scribed a line at the correct length using sharpie as my layout dye. The rim was trimmed with the shears you see in the right side of the image. The band I trimmed off was probably worth a few hundred dollars. Incidentally the material behaves like soft copper. Not super plastic like but definitely soft. 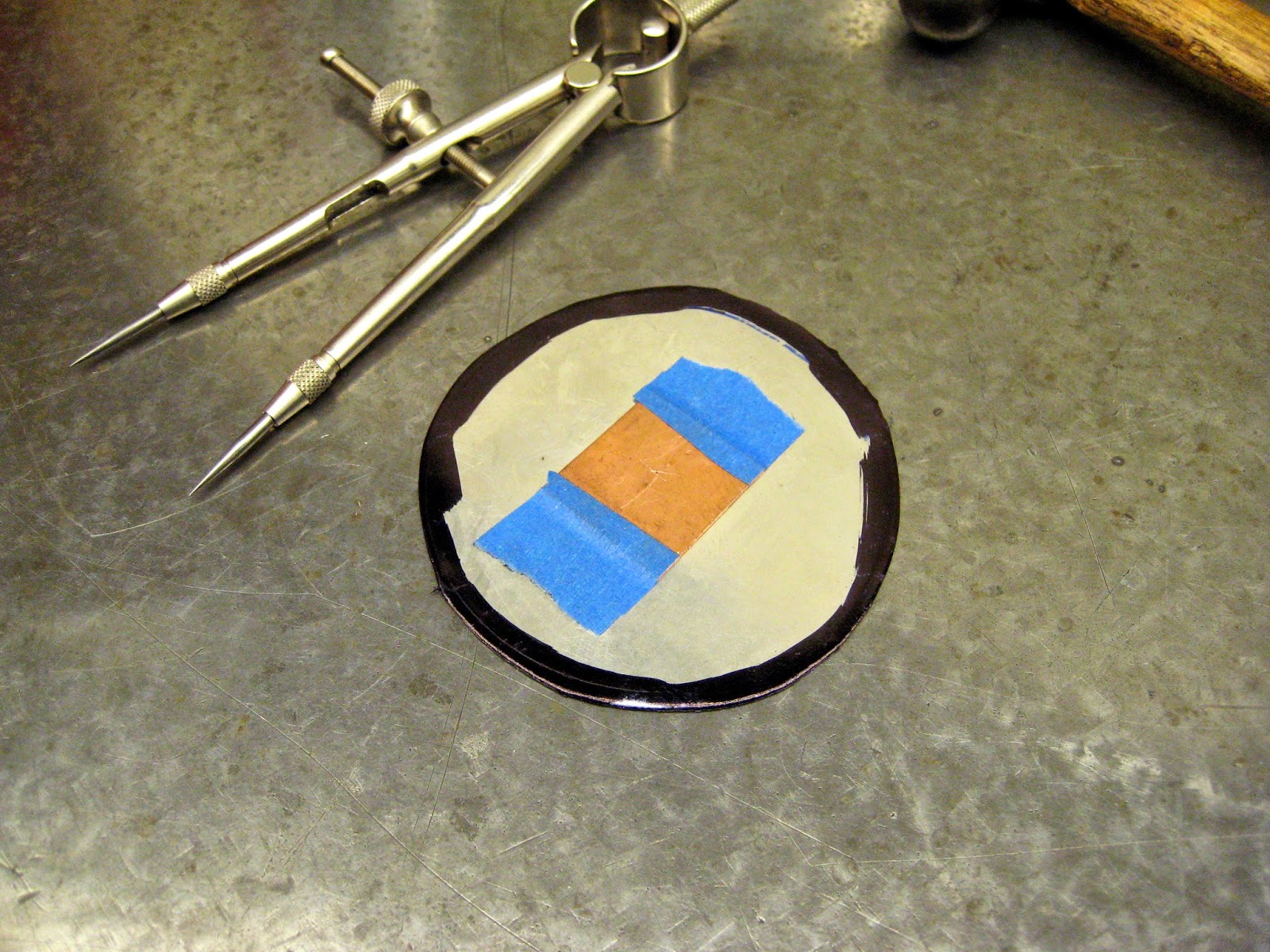 The next part was a little tricky. The disc was irregular and not very round even though it looks pretty good in the picture. It was only marginally bigger than it needed to be with a couple divits that needed to be avoided. I taped the copper pad onto the surface to give me a place to scribe and place the divider point. Marking the platinum disc with scribe marks and a center punch was not on the menu. 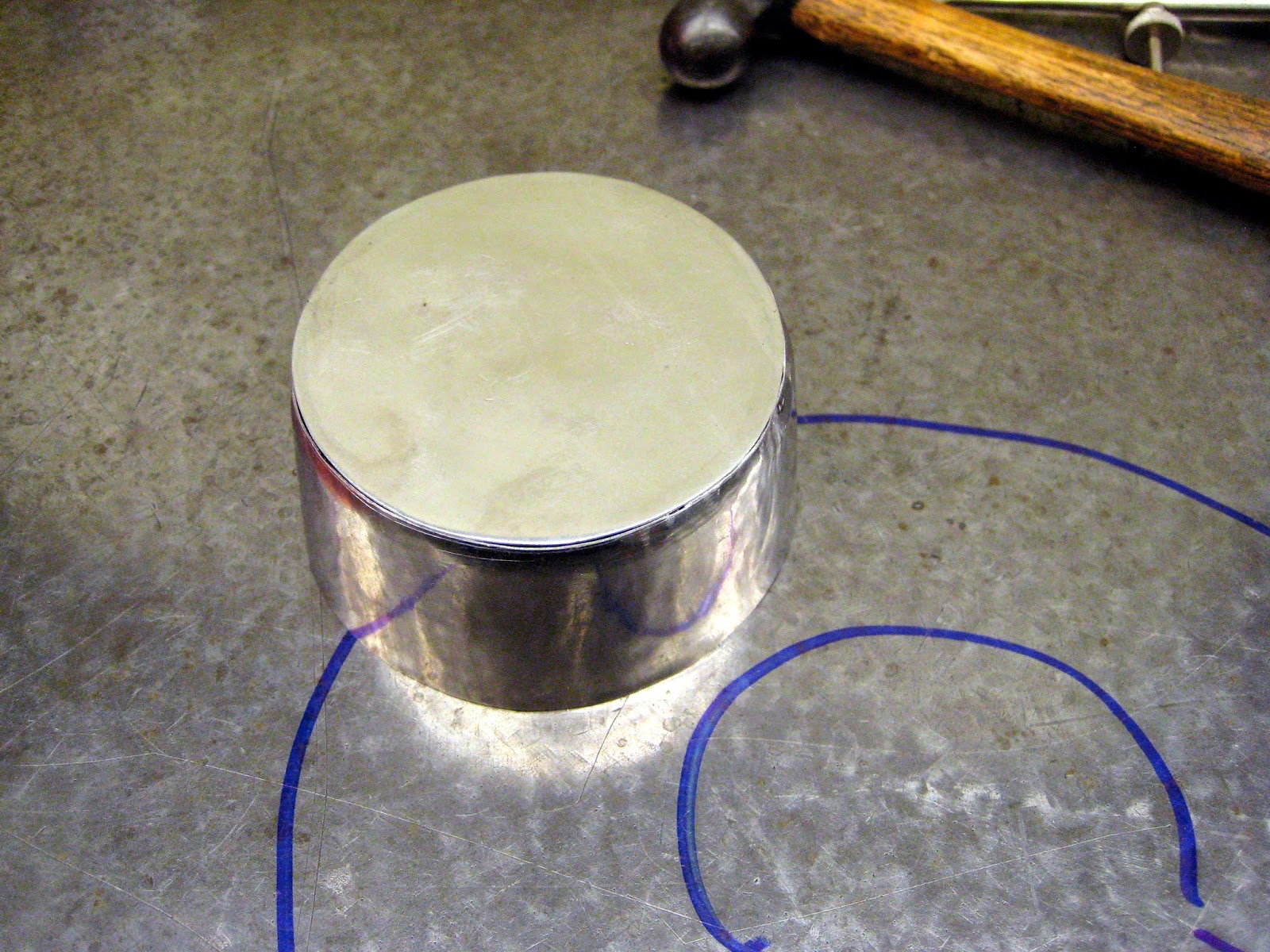 Here is the circle cut out and fitted to the body. You can see I curved the body slightly inward to meet the disc. Better to have the fit in this direction that outward at all. This allows me to fit the corner and take out the curve as I go along tacking the the body to the disc and get a perfect fitup all the way around. Perfect fitup is the key to most welding problems. 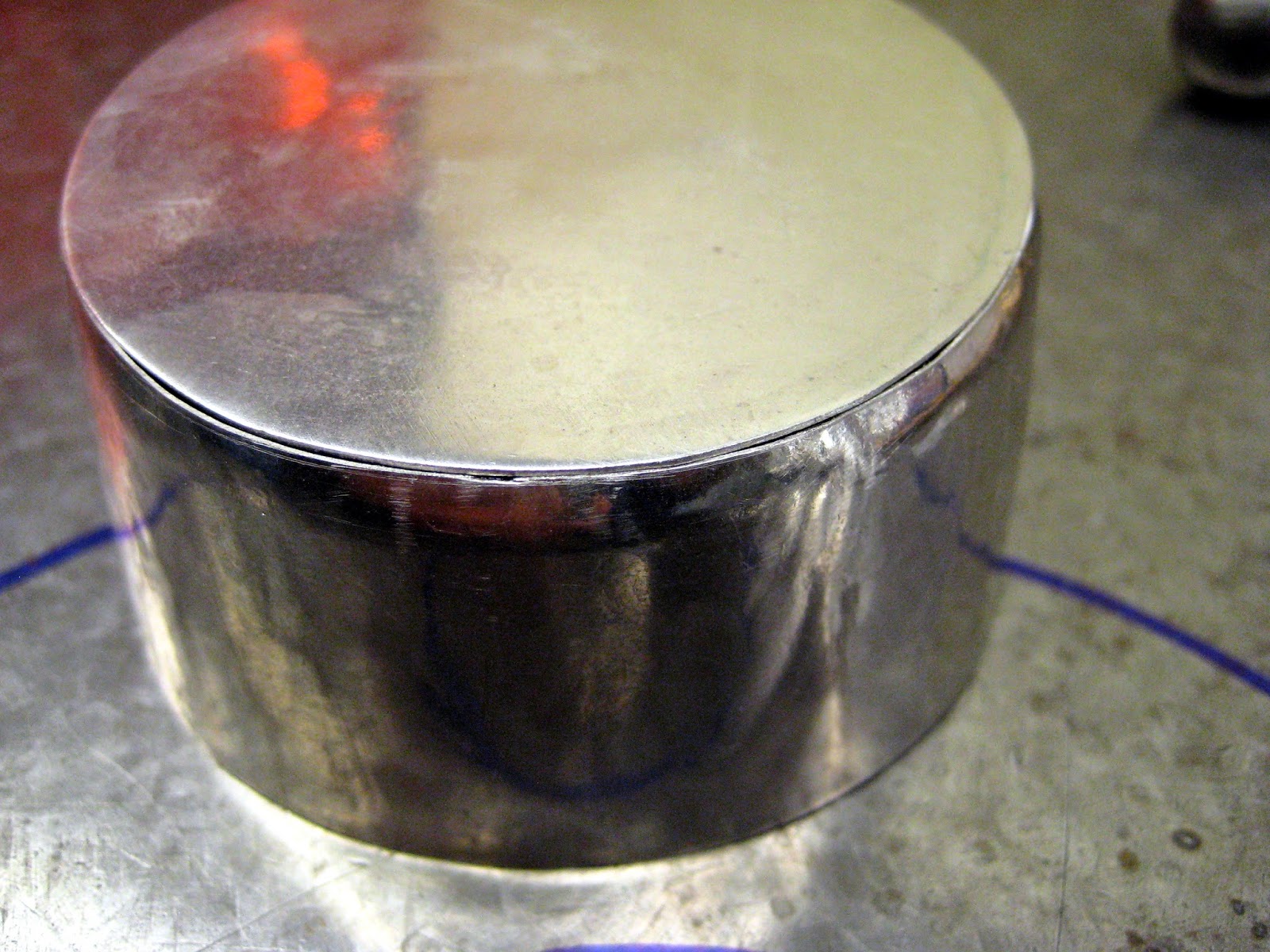 Fitted up and ready for some tacking and welding. Later on I will even out the circumference and straighten the walls of the cylinder. 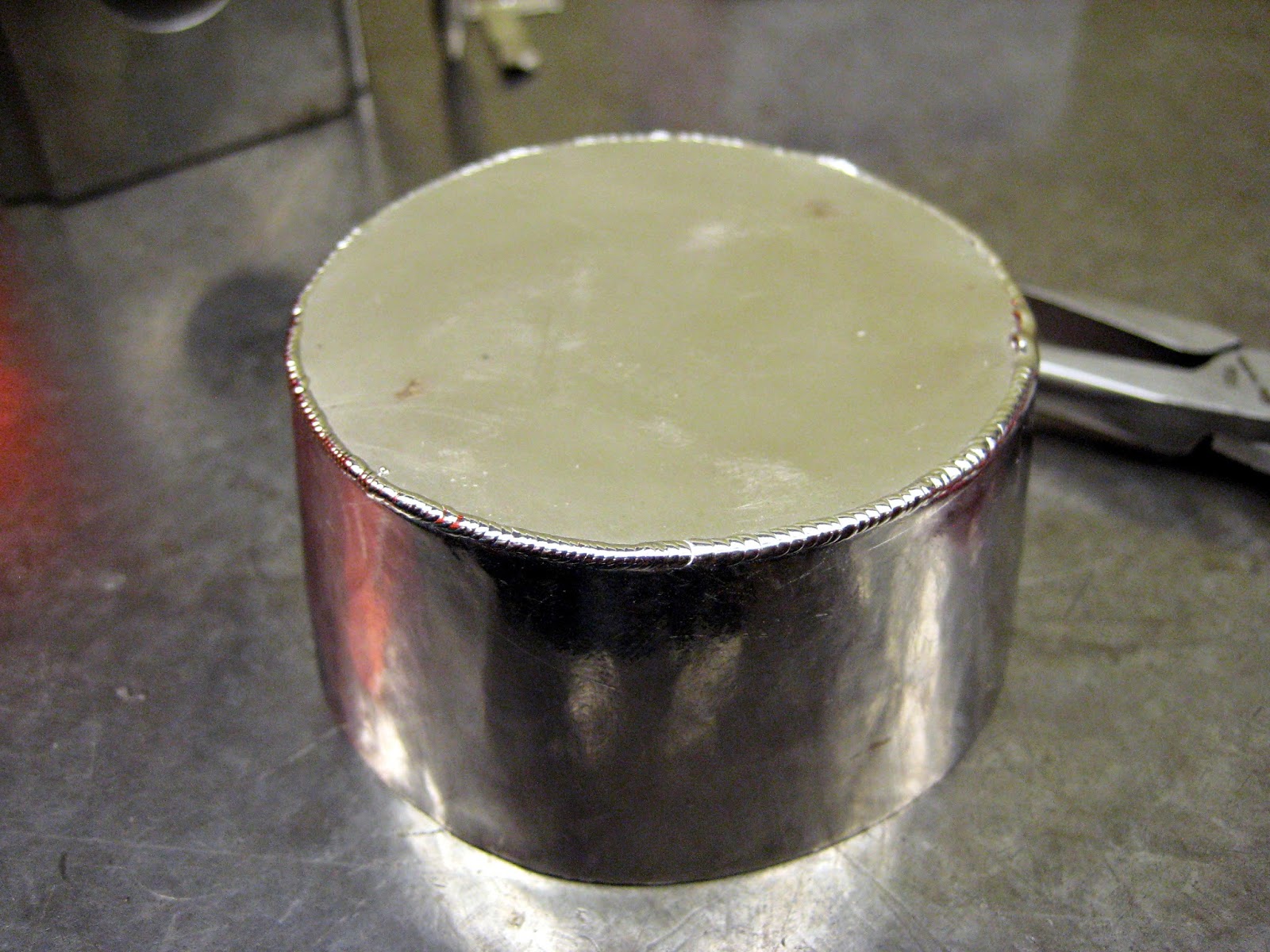 All welded up. The welding went pretty well. I used plain old TIG welding and DC current straight polarity to weld it. I did use filler in the joint because I planned on removing the weld buildup so the crucible would have a nice flat bottom.Yes I collected the filings when I removed the weld. All the scraps will be remelted and rolled into some other part later on. Incidentally Platinum does not oxidize at any temperature. You could almost weld this stuff without the Argon shielding gas. Notice the weld penetration shows zero signs of oxidation from lack of shielding gas. 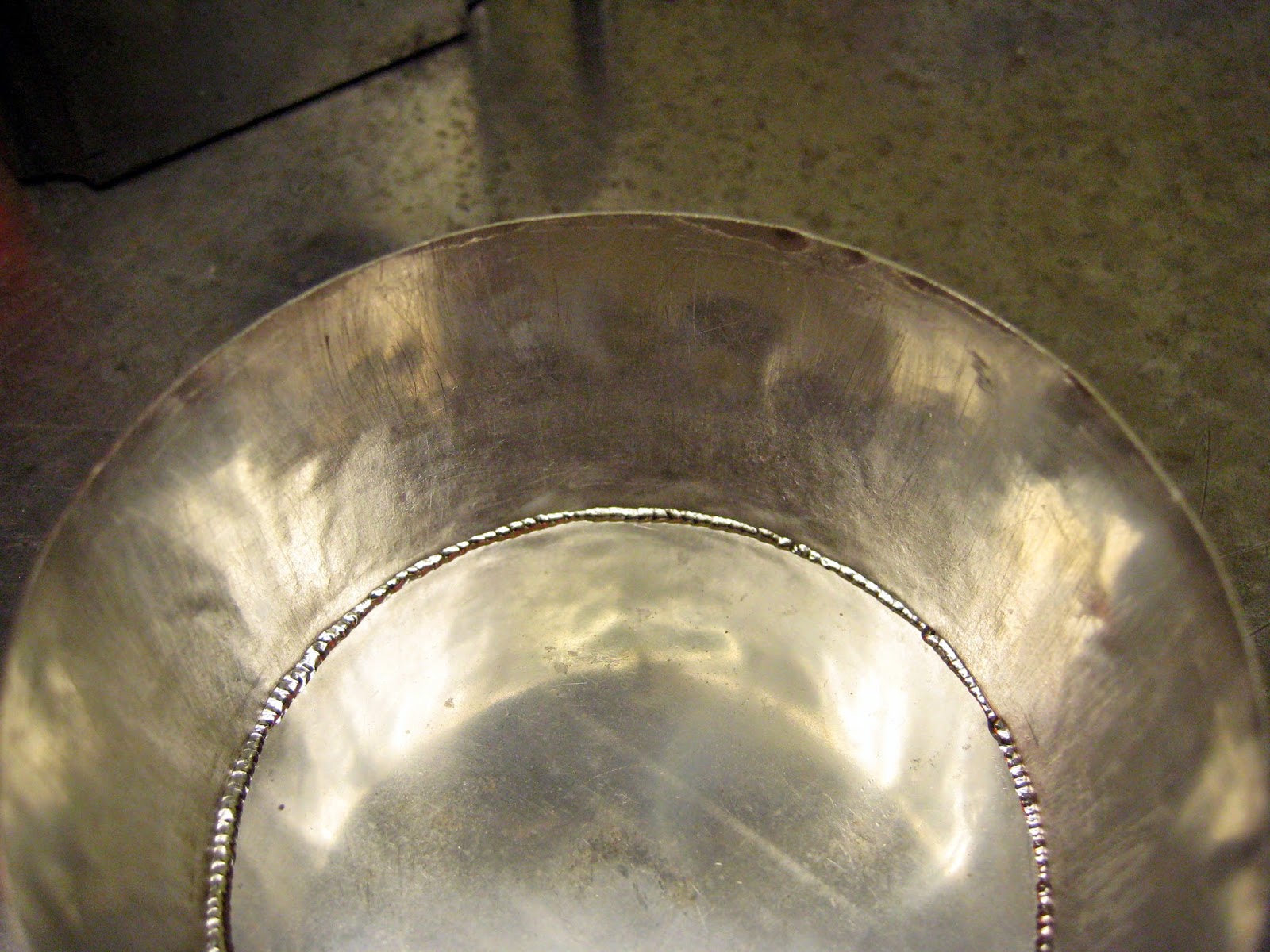 Here is a view inside the crucible showing the weld penetration. 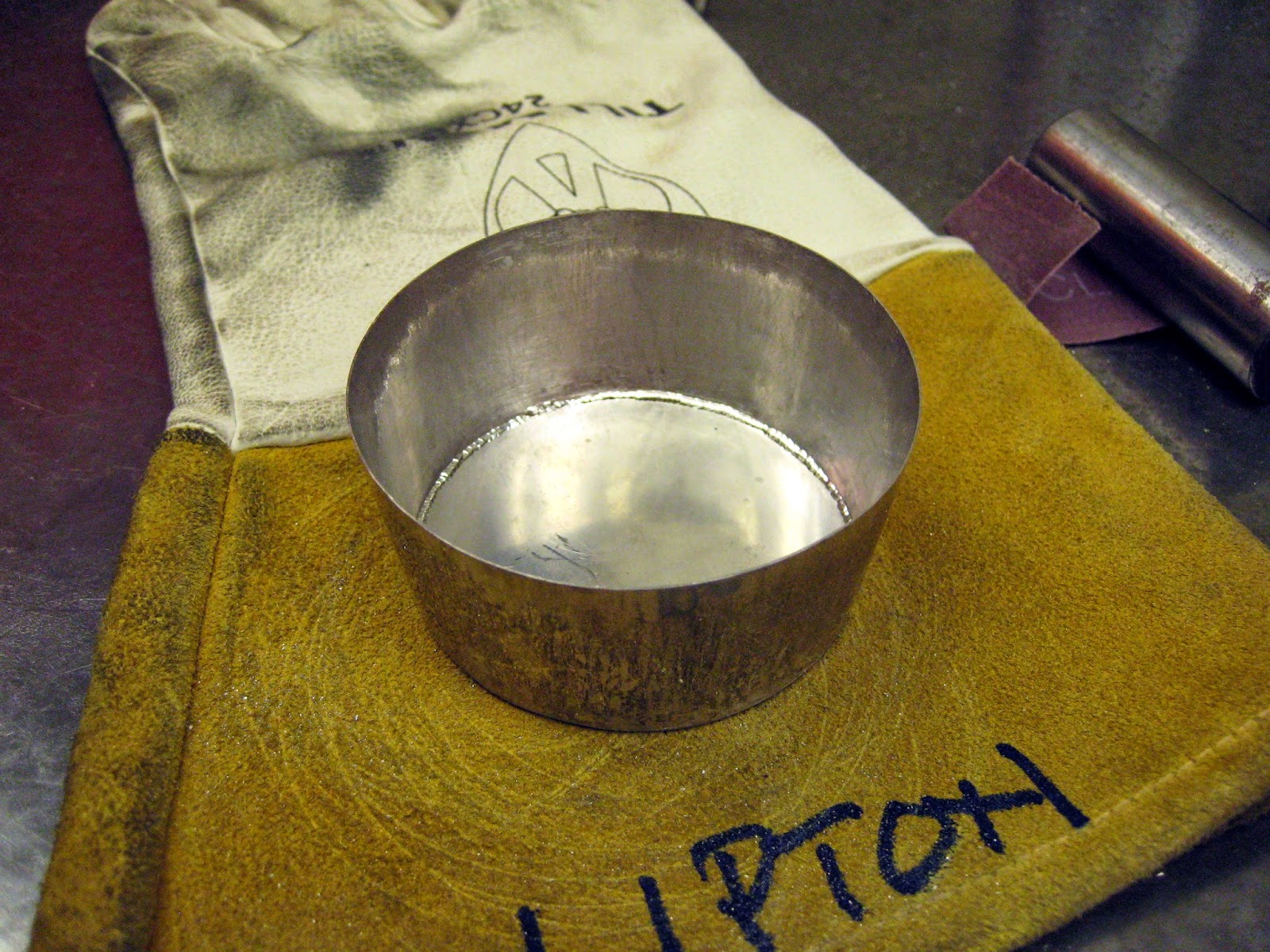 Here is the completed job. I missed a trick and should have made a cup of coffee to take a few sips out of as a joke. I ended up burnishing the outside to smooth small ripples in the wall and take out some of the curve near the bottom I mentioned earlier. Total weight of the finished crucible is just short of 90 grams. At the current spot price of Platinum that is about $4000 in material in the cup alone.

I sure had fun working on it. It filled the bill for a fun job. The guy who brought me the job said he has another job for me this time in Gold. They need some reaction vessel for some crazy thing. He asked me if I was interested in looking at the job. I'll give you three guesses what I said and the first two guesses don't count. Thanks for looking.