For all the time I've been in shops there has been a story floating around that gets repeated whenever somebody has to drill a tiny hole. The story changes depending on who tells it but basically has the same cast of characters. The story goes something like this.

An American company developed a new drill bit for drilling tiny holes. The story teller never has a specification on how small the drill other than its really small. Smaller than a hair is what I've heard told before. This amazing drill took years of development and the company, once again un-named other than its an American company, is rightfully proud of their achievement in toolmaking.

The second part of the story gets even fuzzier. I have heard it told that the un-named American company had a rival or partner Swiss or German company that somehow hears about the new tiny American drill achievement. They politely ask for a sample of the drill for testing on their application or machinery. The American company rightfully proud, quickly obliges and sends them a drill for evaluation.

Depending on who is telling the story the roles can be reversed. The story seems better if the Swiss or German company is showing off their achievement to the Yanks.

So after some interval of time passes a package arrives back at the drill manufacturers doorstep. They open the package and find the drill bit they sent out. They look it over and see nothing so they send it back again slightly confused. Another time interval passes and the package comes back again. No explanation, no note, just a package with the drill in it. This time they look at it closely. To their utter disbelief they look and see there is a hole drilled through the side of their tiny drill bit.

Recently I bought about thirty pounds of old magazines from a guy at the Alameda antiques fair. I found this article in a old Popular Mechanics from the 1950's. It has almost all the parts of the story except the competition between the Swiss or German toolmakers. 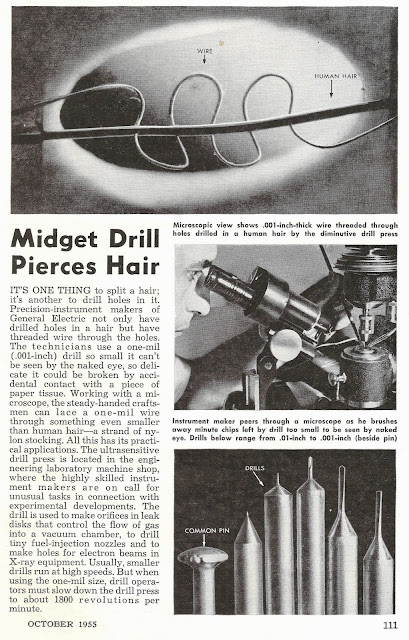 This is from the 1950's Imagine what we can do today. I work with a fellow that has tools as small  as .0004 inches in diameter. Yes, ten microns. You cant even touch the tool with anything without breaking it. It takes a 60,000 rpm spindle to make it do anything. All I know is I would like to see the machinery that tool is made on.